There's nothing worse than a sore blogger, and my ribs hurt. Caught some wretched upper-respiratory-sinus bug that's had me coughing up my lungs, spleen, and other festively-tinted organs of the season for five days now. The glottal, Germanic sound on the front end of Chanukkah has never come in so handy as with this freakin' cough. I just yell Cchchchchappy CHchannunkahhhhhahhhhh into the toilet, sink, whatever, and voila, out comes a dreidel.

First couple days, y'know, you're just stuporous and vaguely annoyed, guzzling tea and C and aspirin as the Ork armies of bacteria build up. It's only when the fever kicks in that you think, oh, this may require drugs, and by the time the searing headache presses against the backs of your eyeballs like pre-natal alien twins, you can barely form a coherent enough thought to say, I'd better call my pal the ENT...

except he's not in. And now it's nighttime and you're convulsing on the couch under a blanket with your temperature dialed to 103.3 FM and these shivers and sweats and you're just gonna tough it out until morning and go to the ER, except come next morning, you can't get out of couch (not that you can sleep, you've had maybe two hours, but you can't move), so you have to wait until afternoon and oh for godsake shut the hell up. SHUT THE HELL UP!

Yeah, hearing voices, too. One voice in particular, which is me as an old man retching and kvetching, "I maintain, I maintain strongly, it's not an ordinary cold." Check the recordings of old folks on Simon & Garfunkle's "Bookends" for a precise re-enactment.

None of this, of course, is sufficient reason for my long dry spulge here -- have I even posted in December? Can't remember when that thing about actors went up, and I'm not going back to look. Just typing this so far has been exhausting. But so worth it, when I consider my faithful readers, a couple (and that's, like, 33%) of whom have asked, "Hey, what up with your lame-ass blog?"

And I say unto them, fear not. For I bring thee writhings of great bok choy, hocked up out of carry-out Bo Ling's, my first food in days, not counting my darling spousette's chicken soup, broth only, thank Yaweh for the woman, she is a saint.

I should retitle this blog "Broth Only." And I should move to a brothel. The spousette is a saint not only for her fine Judaic medicine-woman cookery, but for the strip-tease she did to assuage the fears of a neurotic, fevered brain that the virus had laid waste to my manhood. I know, it's ridiculous, but I'd never gone four days with no sign of life in this admittedly overactive region of my pathetic male corpus.

Lo, I have lived to tell you how sweet it is when a diseased mouth-breather, slumped on the couch, moaning that he'll never get it up again, looks up through rheumy eyes to behold his lovely bride provocatively setting forth to prove him wrong. A SAINT, I tell you! A really hot saint who can shake it like a paint mixer.

And not a moment too soon, cuz having figured on doing all my shopping this week, the only gift I have for her at this point is the same kind Justin Timberlake is giving this year. If you haven't laughed yourself senseless at this adolescent SNL clip and very catchy tune (thanks, Bighead Needleman!), I can't recommend it highly enough. It's been pulled off YouTube, but you can find it here:

And so, by the third horse pill, our hero began to feel halfway human and crawled up the steps to blog. A dick and a blog.

Step one:
You cut a hole in the blog
Step two:
You put your junk in that blog
Step three:
Go 'head, link from the blog
That's the way we do it

My point is, Happy Goddamn Holidays!
Posted by Jasph at 11:57 AM 1 comment:

If you put 100 people in a room, and they’d all been watching movies since, say, the 1970s (this is to eliminate the whippersnapper effect), and you asked them to name the ten greatest living American film actors working today, these names would probably be on all but a few of the resulting lists:

That they’re all white and almost all men obviously reflects opportunity as much as talent. But talent they got. They make the list by sheer numbers of amazing film moments amassed over years and years, movie after movie. I say “moments” rather than “performances,” because I think we remember a few brilliant, authentic moments and call the whole thing a great performance, as long as there’s an arc to it and there aren’t fake moments to undercut the brilliant ones.

From Robert Duvall’s first movie role in “To Kill A Mockingbird” (and all he had was a moment), through the big leads like “The Great Santini” and “Tender Mercies,” right on up to the old-codger supporting roles he’s getting today, he seems never to have committed an inauthentic moment to film. As with De Niro and Newman, it never looks like acting. He just seems to be living in front of a camera.

Pacino does seem like he’s acting sometimes, but it’s usually when he’s enjoying himself so much that the scenery tastes good to you, too. And Meryl Streep, well, it’s just a privilege to live in a time when you can watch such a superb actor try so many different things. Anybody who pulls off “Sophie’s Choice” and “Silkwood” and “Out of Africa” and “Ironweed” but also “Postcards from the Edge” and “The River Wild” and “Adaptation” and that Lemony Snicket movie, for the love of God... That’s better range than any of the guys have. Pacino has the widest range of the male actors on the list.

So who else? And by what criteria? I didn’t put Jack Nicholson on there, because as much as I’ve enjoyed watching him over the years, he’s like a jazz musician who has a few arpeggios that he leans on in every solo. Likewise, Gene Hackman. And I didn’t include James Gandolfini or Edie Falco, because their titanic, greatest-TV-acting-of-all-time performances are, after all, on TV.

For a long time, I’ve felt that the greatest living actor might be Morgan Freeman. The range issue is still there, but you never doubt him for a second and he confers some kind of deep, dignified humanity on everything he touches, even in otherwise lame movies. He’s a black, male version of Vanessa Redgrave, who I don’t get to include because she’s not American. But damn. I might add Wes Studi, who’s never going to play the lead in a comedy, but should have gotten an Oscar, a lifetime achievement award, and a MacArthur grant for “Geronimo,” if you ask me.

But then, if we were just going to base it on one huge, stunning performance, the whole list would be different. Billy Bob Thornton would probably make it, and so would Terrence Howard, and so would Heath Ledger. Wait, Heath’s not American. He should get honorary citizenship for “Brokeback Mountain.” But if I let him in, I have to let Christian Bale in. We don’t want a coalition of the top billing.

For overall greatness established over at least a couple of decades, I’d have to fill out the ten with Morgan Freeman, Sean Penn, Sissy Spacek, Ed Harris, maybe Denzel. Or maybe Viggo. Or maybe John Cusack. Phillip Seymour Hoffman? Or the most abundantly gifted of them all, maybe, Robert Downey, Jr.

If range were the main criterion, my top ten would be:

Except for Parker Posey and maybe Jamie Foxx, I think they’re all at least 40. It takes time to establish range. I wonder if Clooney should be on there. Not a long track record, but from “Out of Sight” to “Good Night and Good Luck” to “O, Brother, Where Art Thou?” Still, he’s always kinda Clooney.

And of course, I left out my relatives. Employees of the Lotto and their families don’t get to play.

My arch-blogrival Bighead Needleman came into my office this morning throwing yogurt and dissing Bob Dylan. If I were Bob Dylan, I'd write a song about it, rather than a blog entry. It'd be something like this:

Well, Bighead she come down the corridor
She got the medicine made from a toxic spore
And I say, my lacto-intolerance can't tolerate no more
I aint no health food saint or craft-services movie star--
But she just look at me and said, you ain't? what you mean you ain't, of course you are

The thing is, I think if I could just put together the perfect mix of Dylan songs, she'd see the light. I told her I might just do it. But of course I won't. But if I did -- is that too O.J. Simpson? -- I'd start with the young Bob.

Off the first couple of albums, I'd take these two songs:

1. Tomorrow Is A Long Time
2. Don't Think Twice, It's Alright

Simple, see, so you get the taste and the lactobacillus without having to stir the fruit up from the bottom just yet. We'll avoid stuff she's already heard and found overrated ("Like A Rolling Stone"). But I'd pull something off Highway 61 Revisited to complicate things a little:

And then I'd goose the complication with something narrative from The Times They Are A-Changin':

4. The Lonesome Death of Hattie Carroll

Then back to simple, with Nashville Skyline:

As we enter the middle Bob phase, it gets trickier. 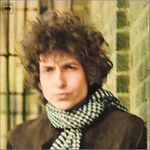 We must keep her interest, yet show some range. She's a humorist, so we can remind her that Bob is, too. But we also need the tunefulness, see. From Blonde on Blonde:

but it'd be the live version off of Biograph, not the Blonde on Blonde version. Similarly, I MIGHT throw in

also from Biograph. It's not the greatest lyric ever, but along with that live Visions of Johanna, it'll lay to rest any doubt she may have about his musicianship. It's like the guitar, harmonica, voice, and words are all one organic thing on those two. Hands down, his best harmonica playing ever. Damning with faint praise, I know.

Then we have to do a couple from Blood On The Tracks:

Then we'd jump right past the identity crisis and lame posturing of the 1980s -- not that there weren't some good tunes here and there, but jeez. What might get to Bighead from the later Bob?

And then we round it out with the sublime Love and Theft:

Then she'll see that Bob is really the love-child of Rimbaud, Steven Wright, and Jimmy Durante. Now that's a three-way I'd buy tickets to see. I'd add a couple of songs from the new album, too, but I haven't listened to it enough yet to decide which ones.