I stole this idea from John Moltz, one of my favorite Twitteristas. On his blog, he posted this photo of Obama's maternal grandparents and an excerpt from a piece by Ta-Nehisi Coates in The Atlantic, which I'll reprise below: 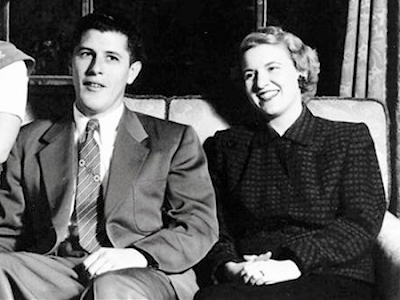 ...I was looking at this picture of Obama’s grandparents and thinking how much he looks like his grandfather. And suddenly, for whatever reason, I was struck by the fact that they had made the decision to love their daughter, no matter what, and love their grandson, no matter what. I’d bet money that they never even thought of themselves as courageous, that they didn’t give much thought to the broader struggles in the the world at the time. They were just doing what right, honorable people do.

We often give a pass to racists by noting that they were “of their times.” Fair enough, and I know Hawaii was a different beast, but still, today, let us speak of people who were ahead of their times, who were outside of their times. … Here’s to doing the right thing.

John Moltz titled his reprinting of this, Here's To Doing The Right Thing. I gave mine the title I did because I had an idea that if it got reprinted enough...I don't know. That it would sink in. That it would seep through the unconscious prejudices that so many of us have and overflow into We Shall Overcome or something. That we'd remember some part of ourselves that's connected to everyone else. And we'd love that part more than whatever it is in us that insists we're separate or better or somehow more human than others.

Steal this post and reprint it. Share it. Keep adding to it. We may not be ahead of our times, but we can at least make good on the promise of those who were. Yes, we can.
Posted by Jasph at 7:19 AM 504 comments: