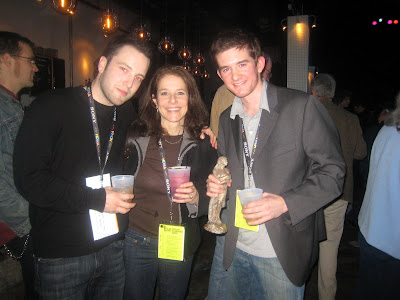 Noah, Sam, and a third partner (hence, Couple 3 Films) spent much of last year working on Crude Independence, their unique look at the oil boom in North Dakota. I saw a version of it before the final sound mix, and it's splendid. Apparently, the festival circuit thinks so, too. Last week, Crude Independence made it onto the prestigious SXSW schedule, a fifth festival acceptance.

I love these guys like mad, and am so freakin' impressed by their talent and tenacity. I almost said "proud" instead of "impressed," but pride seems to imply something more self-reflective than the sheer admiration and respect and "wow, is this cool or what?" that I actually feel about their work and its much-deserved success. I'm avuncular, though. Don't punk the unc.

Keep up with Couple 3 via the link in my sidebar, labeled "My filmmakin' nephews." Are they ever.
Posted by Jasph at 10:10 AM 5 comments: