Here's Jonah at breakfast on his first day of 3rd grade. 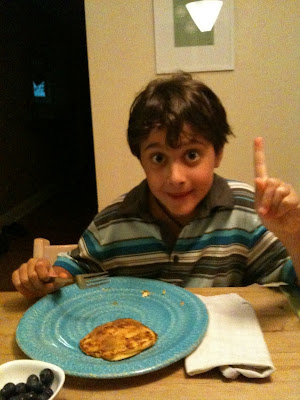 He's doing his Timid Pirate voice, which is like a bookish elf crossed with Woody Allen as Broadway Danny Rose. The basic Timid Pirate construction is: "If I, uh, might interject at this juncture...um...ARRR?" or "Could someone please, uh, tie that scurvy dog to the, um, yard arm?" Always with the index finger raised.

We're working on a long skit for the cub scout den, in which all the other boys are regular pirates and Jonah is the Timid Pirate. It goes like so: "12 pirates walk into a BARRRRRR (all the boys chime in with ARRRR). Bartender says, 'What's your pleasuRRRRRe?' And the pirates all say (three groups of boys yell in sequence, 'MARRRRRGARITA!' and 'MARRRRTINI!' and "GROG!"). But one pirate steps up and says, (Jonah, index finger aloft): "Could I perhaps, uh, order a Wild Berry Capri Sun?" And the pirates all go, "ARRRRR! Stupid timid pirate...." Bartender says, "It's Happy HouRRRRR. Would you like any appetizeRRRRs?" And the pirates all order, "CalamARRRRRRRi!" Except for the timid pirate: "Um, could I trouble you for a small house salad with lite ranch dressing on the side?" (Jonah came up with these lines himself--priceless, in his high little voice.) Eventually the other pirates beat him up with their wooden legs...

We're still working on an ending that kind of reverses the roles. Please submit ideas if you have them. (First pack meeting is tonight. My love-hate relationship with this stuff remains intact, but a good skit can transcend the venue.) Seriously. Help me finish this goddamn skit.

In the above photo from August 17 (weird, summer being over so early), he's the Timid Eater: "If I might make a small request...um, could I eat this pancake without being photographed?"

This, along with fart humor (both real and armpit-generated), faking like he's just taken a painful shot to the crotch (we probably hear "oooof...my groin!" at least a couple of times per day), and anything having to do with pineapples (beats me, but he's talking about going as one for Halloween--I think he just likes the randomness of it), currently constitute 90% of the kid's comedic stylings. The rest is on-the-fly wackiness.

He really is one of the most spontaneously funny kids I've ever known. I hope he can keep that alive through the next decade of public school. It's been weird to watch him grow more like other boys as he adjusts to social pressures, the need to be cool. Yep, already. He was always way ahead of everybody his age, verbally, but was a late-bloomer emotionally, a strange combination of oversensitive and under-aware, as if the membrane between him and the world was too thin in some places and too thick in others. He seems closer to the middle of the spectrum now, as other kids have narrowed the gap intellectually and he's learned to deal a little better with what life throws at him.

I can't imagine that he won't always be exceptionally bright and at least somewhat acerbic. This is the kid who, having been called a "know-it-all" by several of his classmates last year, said, "They don't even know what a know-it-all is." I hope he can develop social grace without losing his unique perspective.