I'm a father of three. One is a daughter. Emily will be 35 in a few days. I was getting ready to be her dad at about the age Soon Yi Previn was when she chose Woody Allen over Mia Farrow. My daughter now has a daughter of her own. It goes without saying that I love them. But why go without saying when there's so much to say, so many places to say it? Take the Woody Allen/Dylan Farrow story. Please. (I know not even Jack Benny can help us now, but we must smile when we can in these times.)

I haven't posted here in nearly a year. I've increasingly gone silent on other social media, all of which seems to me lately an overused skillet for rendering the fat of judgment from the rancid bacon of self-aggrandizement. Or vice-versa, I don't know, stupid metaphor. I scroll through my Facebook feed, hoping to see a new photo of little Zinnia, so the whole thing won't seem like a grotesque waste of time. Usually, there's no new photo, because as a working mother, Emily doesn't have time to waste.

More often than not, this past week, my quick daily scroll has become a series of digressions into the Woody Allen/Dylan Farrow "story." Horrendous. Friends post links to "articles" that feel embarrassing to me in their assured correctness. I'm using the ironic quotes because so much of this chatter is redolent of a peculiarly wretched strain in human nature, now magnified a billionfold by the new forums we've created to amplify our incessant need for notice or certainty or moral superiority. The sanctimony on both "sides" seems ideological. Reading all these things, the idea of participating has felt like wading into a cesspool, with way too many people splashing around in it already, all trying to be the smartest or most judicious shit-splashers, or just the most re-blogged, re-tweeted, re-splashed.

The catalyst for my jumping in was something I saw on Twitter yesterday. It came from Miranda July, whose work I admire. The tweet was one word: "Wife." The link that followed was to this photo. 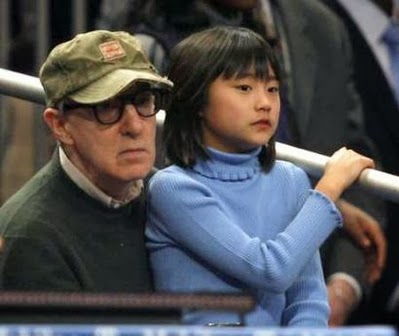 It gave me pause, which is generally a good thing in any consideration of alleged wrongdoing. It's brilliant, really—a one-word caption before you see the image, and then the picture in place of a thousand words to roll up all the accusations about Woody Allen as a pedophile—a pinprick of provocation to anyone who follows you on Twitter and clicks through. And who wouldn't click through? You're Miranda July. You're provocative. You make people think. Your movie Me and You and Everyone We Know is an amazing portrayal of human relationships and longings and social complexity. Your book No One Belongs Here More Than You is full of stories that offer the same kind of tenderness, wit, and weirdness. I sat and pondered this tweet for a moment. What does it mean to post a photo of Woody Allen with Soon Yi Previn as a little girl, long before she became his wife, captioned with the word "Wife"?

And then my thought emerged from the foggy swamp of topical news, the celebrity tweet, the chatter and the chum for opinion-sharks. I saw with sudden clarity the girl's face. And I thought, That's not Soon Yi.

I could be wrong, of course. But I think Miranda July is wrong. Assuming the photo is real, there's probably a date for it that might confirm this one way or the other. But why bother with hard evidence in the court of public opinion? We can say whatever we want. Is that Soon Yi as a little girl, or is it her daughter (adopted, with Woody Allen)? Look at this photo and see what you think: 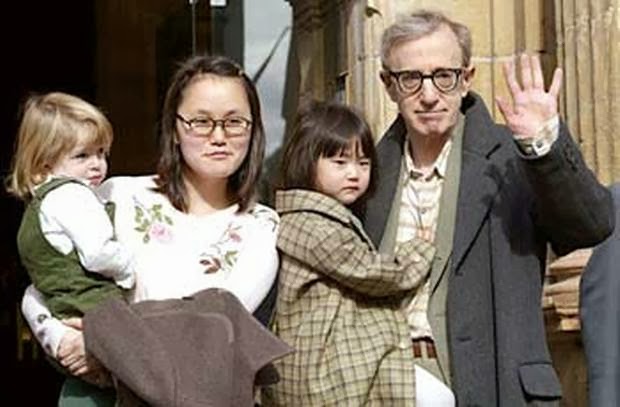 That's Woody, Soon Yi, and their two adopted children. Soon Yi has a very distinctive face. Here's a shot of Soon Yi from when she was closer to the age of the girl in the first picture: 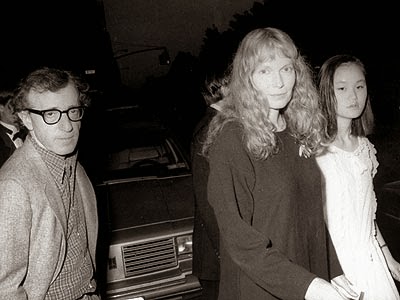 Then look at this one, where Woody's and Soon Yi's oldest adopted daughter, Bechet, is closer in age to the girl in the first picture: 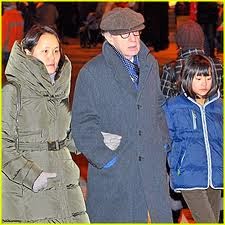 I hope Miranda July takes a look at these photos, because unless she's got blinders on, I think she'll come to the same conclusion I did. If she felt compelled to comment on other people's lives in this way, she should at least get the lives right. Her tweet, if any, should have read: "Daughter."

Update: Visiting Miranda July's Twitter page to get a screenshot of the tweet, I find that she's taken it down. In its place, with no reference or context: "I mean Daughter."

That changes the message. Some people might find it even more chilling, viewing this little girl as just another in a long line of Woody's underaged sexual targets. If she is or has been, and if Dylan Farrow really was molested at age 7, it's more horrendous than all the media cesspool that has gathered around the story. If, as he claims, Woody never did any such thing and is himself the target of a revenge smear, it's a deepening and widening of the pool.

I don't know, of course, and to say I don't know doesn't mean I'm "blaming the victim." It doesn't mean I'm discrediting anyone or passively accusing. It means I'm not omniscient. I'd like to suggest that no one is, that we can all learn more, think more, consider more, before offering up an opinion or provocation. As I looked at these photos to make sure I was seeing them clearly, I was trying to think: what do I really know about these people? Almost nothing. I've read a lot, and still I know almost nothing.

What I Think I Know

I know that the break-up of Woody's and Mia's unique, separate-lives/shared-family relationship was precipitated by her discovery of his affair with Soon Yi, or so they all have said. I know the allegations about his molestation of Dylan Farrow came out in the ensuing custody battle. I know the investigation did not find evidence of sexual abuse, that Dylan Farrow's statements have contradicted each other and been characterized by investigators as "coached"—and that these things don't mean the allegations are false. I know Woody Allen says they are. I know that Woody Allen and Soon Yi have been married for about 17 years, and that Soon Yi herself has said that he was never a father figure to her, that she spent very little time with him as a child, and that they became lovers when she was 19. I know that 20+ years later, they're married with two adopted daughters. I know that whatever we think of a 56-year-old man taking up with a 19-year-old woman, there's a huge difference between 19 and 7, and a huge difference between sleeping with someone else's adopted daughter and molesting your own. And I know that even the best, most balanced, comprehensive, clear-eyed writing I've read on this subject ultimately cannot provide the answers we seem to want.

All of it brings me back to my own daughter, her daughter, the way we fall in love with our children and, in a way, with all children—the enchantment we feel in their beauty and aliveness, how thrilling it is to encounter beings who seem unspoiled, undamaged, untouched. I know that for some people, the compulsion to touch the untouched is irresistible. For anyone with an imagination, it's not impossible to see why, and for anyone with a moral conscience, recoiling from that imagined transgression is immediate and powerful. I'm not easily repulsed. It usually takes a child molester, a rapist, a terrible injustice, or an egregious use of social media to do it. I can imagine a lot without feeling that I'm crossing a line or taking a side.

It's easy to imagine the pain of this family. It's also easy, I think, to imagine being accused as Woody Allen has been, and to feel the sense of injustice you'd carry if the accusations were false, the guilt you'd feel if they were true. We can imagine these things because we're really no different than Woody or Mia or Soon Yi or Dylan. We want love. Our families are fraught and fucked-up. We fight, we accuse, we defend, we try to do what we think is best.

I think of Emily and Zinnia. The idea of anyone hurting either of them makes me understand vengefulness. If Mia Farrow believes that one of her children was sexually abused, it's completely understandable that she'd want to destroy the abuser's life. I would, too. Even if the way she and her son Ronan use Twitter to air their enmity and judgment is distasteful, it's easy to understand why they do it. And it's easy to understand why Woody Allen wants no part of it, reluctantly issuing statements to defend himself.

I don't understand the compulsion to take a side in such a personal family matter, where so little can be known with certainty, and lob an opinion about it into the public square. How do people do that and not hate themselves later? Maybe they hate themselves already. Maybe we're all just projecting our worst tendencies onto Woody and Mia, the way we always have with public figures.

When someone as smart and sensitive and deeply-seeing as Miranda July can do something so misguided and potentially hurtful with just a handful of keystrokes, and it can get all the way around the world in an instant, we're no longer even in the court of public opinion. It's just Me and You and Everyone We Don't Really Know. The photo of Woody Allen and his daughter goes out with the caption: "Wife." It floats around the cesspool until it becomes indistinguishable from all the other shit.

And yet that little girl, Bechet, is a person. Born in China, adopted by American parents. She has a daddy. He's famous, so they get their picture taken wherever they go. Some of the pictures get used as weapons against him. We don't know what the pictures really mean or what the effects of this kind of fame and infamy are. We don't know what their relationship is. She's 15 this year. Woody's 150, or probably feels that way. We don't know. If the picture is for real, all we really know is, a girl sat on her daddy's lap. Someone took a picture of it. And then a bunch of shit happened, and next thing we know, the girl has been negated, presumed to be her adoptive mother, and the great game of misinformation and misjudgment and misanthropy goes on.

I wish Zinnia had a different sort of world to grow up in. Emily and her husband are splendid parents, so maybe, to the degree that Zinnia is treated with tenderness, respect, and dignity at home, her world will be different where it really matters. 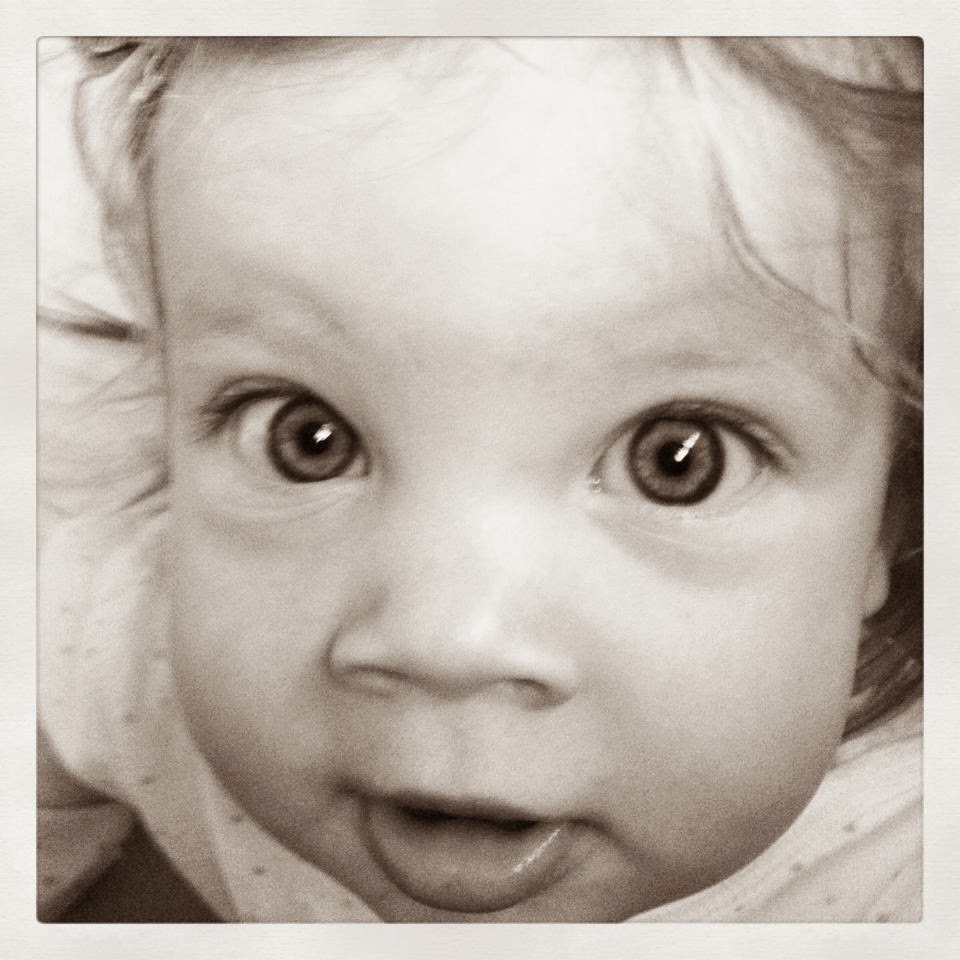 She deserves that. So does every little girl, every child, and in fact, everyone. All of us adults, we deserve better, too. The great thing is, we can have it.

We can start by shutting the hell up. And now, I think I will.
Posted by Jasph at 3:20 PM 7 comments: