Sick twice in the past six weeks, the same gross cold on either side of a hay fever month. This second bout of hacking, wheezing, and post-nasal gradoo sneaked in while I was distracted by itchy, watery eyes and non-stop nose-blowing. Man, it's a drag.

So. What am I doing to cause this, besides working too much and not exercising? Cuz that's nothing new. I contemplated my outlook of late. Despite springtime and many family joys and Twitter and what I think is a fairly sanguine predisposition, it's been pretty lousy. I've been down on myself, on work, on the world at large, life in general. And I realized, I've come to view Positive Thinking kinds of programming as vacuous happy talk. Why? I don't know. I used to be much more of a "create your own reality" kind of thinker. Where'd that go? I don't think I can blame the Bush administration for this.

So I do a search on positive thinking, just to get reacquanted. And I find the Positivity Blog. Sound horrible? Maybe. But lo and behold, the most recent post is about a major hero of my teen years, Bruce Lee. Turns out, on top of his legendary martial arts skills, Bruce also kicked ass as a positive thinker and productivity guru. (Go ahead, be like me and say, "Yeah, look how efficient he was at dying young.") But lo! The blogger quotes several key principles of Bruce Lee's personal and professional philosophy, and then expands on them. The second principle in particular caught my eye: 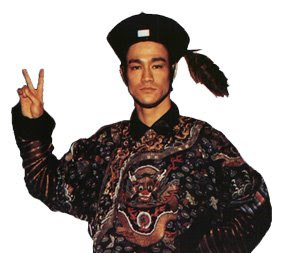 “If you spend too much time thinking about a thing, you’ll never get it done.”

Adding more thoughts and thinking things over for the 111th time may create a sense of security. It’s also a good way to procrastinate and to avoid taking that leap you know you should take. And the more you think, the harder it gets to act. Perhaps because you want to keep that comforting sense of security and avoid the risk of wrecking that feeling.

Thinking has its place. It can help you plan a somewhat realistic route to your goal and help you avoid future pitfalls. Overthinking is however just a habit that will help you waste a lot of time.

I've been doing exactly this. I've been putting off several things that have to get done for the June wedding trip, and continually thinking, "I need to call so & so, and then I need to do blah-blah, but before I can do that, I've gotta find out X, Y, & Z--oh, and I need a luggage rack for the car..." and ALWAYS, to conclude this litany, the refrain: "I don't have time to do all this shit."

I just found a 3x5 to-do list in the pocket of a pair of jeans I haven't worn in at least two weeks. There's only one thing on that list that I can cross off. I've done one thing I need to do, out of about twelve.

Maybe I'm sick because all I do is think. The sheer tonnage of stuff I've put off doing has crushed my immune system.

And I thought the only lesson Bruce had to teach me was the one about the finger pointing at the moon. "Concentrate on the finger, and you miss all that heavenly glory."
Posted by Jasph at 8:24 AM 4 comments: