My friend Stacey sent me a link to the catchiest, most kinetic music video in recent memory. Two-and-a-half minutes of irrepressible joy.

It reminds me of the early Police, back when they were making really great, thumpy, zippity music and having fun in front of a video camera. "De-Doo-Doo-Doo, De-Da-Da-Da," anyone?

What kills me is the idea that there are dozens of little bands out there, doing bang-up numbers like this, and there's just not enough time to listen or watch or even think about it.

So Cool, It's Frozen

Why is this so utterly freakin' cool?

I have theories:
1. Because of the scale of the mischief.
2. Because it's disruptive, but essentially harmless.
3. Because of the way it forces a shift in awareness--the wonder and curiosity it elicits.
4. Because of the tension between opposites: stasis amid movement, pointlessness amid purpose, precision amid chaos, art amid commerce, a moment of timelessness in a place that's all about schedules, the unexpected monkey wrench thrown into the quotidian works.
5. Because it has a beginning, a middle, and an end—Aristotelian beauty—and each has a different effect.

Maybe the point about pointlessness is the real thing here. Can something be beautiful just because it's pointless?

William Carlos Williams has a poem that answers: Yes. Here's the first half of "The Crowd At The Ball Game":

The crowd at the ball game
is moved uniformly

by a spirit of uselessness
which delights them—

all the exciting detail
of the chase

and the escape, the error
the flash of genius—

all to no end save beauty
the eternal—

So in detail they, the crowd,
are beautiful

(Nice poem, up to there, and then he kind of loses it, if you ask me.) The ball game is the freeze and the crowd is everybody in Grand Central who's not in on the joke—and the beauty of the crowd = the details of their response. Don't you just love the looks of bewilderment on their faces, the guy poking that frozen girl in the arm, the driver honking and radioing for help, and that great remark at the end by the guy who thought maybe he was the only one seeing it happen? Fabulous.

Up with pointless acts of mind-fuckery! Up with Improv Everywhere!
Posted by Jasph at 12:27 PM 5 comments:

Streets blocked, parking lots closed, sniffer dogs sniffin', a motorcade a quarter-mile long (including armored SWAT vehicles, an ambulance, and sinister SUVs with weird black cylinders on the roof), and curtains of tarps hung from outdoor walkways to prevent a long-distance sighting through a rifle scope. Not to give you whiplash after my last post about Dr. King and Bobby Kennedy, but thus arrives George Bush the younger, trailing clouds of much ado about not much.

While he was here, the president apparently made a card at Kaleidoscope, our creativity workshop for kids, asking a group of reporters, "Who deserves a valentine?" I guess love is just not gonna be unconditional with this guy.

At the Hallmark visitors center, he had a brief run-in with Maxine, our beloved curmatron, viz.: 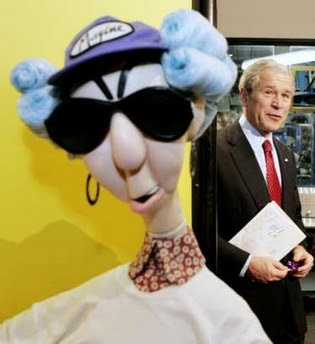 I'm trying to imagine what words of wisdom she might have about the experience...

"When life give you lemons, blame Florida."
Posted by Jasph at 3:21 PM 7 comments: