Wind Inside A Letterbox

Hadn’t been out of the house in weeks due to various people’s various stupid illnesses and commitments and my own stupid work schedule, and when we finally got a night out, my darling spousette wanted to see Denzel and Russell’s tete-a-tete in American Gangster, and though I was willing, other movies were higher on my list, so when we excaped later than espected and missed the 4:00 show but could still make a 4:25 of ACROSS THE BLOODY MAGNIFICENT STRAWBERRY FREAKIN’ UNIVERSE, I was willinger still. I’ve been worried that my current movie project might be late to catch a wave of resurgent interest in‘60s culture, what with new anthologies and retrospectives of the lit and music of the time appearing right and left, not to mention documentaries and retrospectives and books of San Francisco poster art and articles on Frye boots and ads with psychedelic leanings and Gus Van Sant optioning The Electric Kool-Aid Acid Test and the release of this Julie Taymor monster, which I feared might encroach on Drop City territory and I had to know just how much....

Well, the closest thing in it to anything I’ve written is the Merry Pranksters sequence on the bus, with Bono as the acid evangelist. If the photo weren’t so wee, you could see him there, mid-“I Am The Walrus” (a splendid cover, although let’s face it, nobody can out-Lennon John). Happily, this sequence stomps on Gus Van Sant’s material far harder than on the toes of Drop City, in which the bus exodus has been montaged and redacted and deleted and reduxed and Dylanized and wrung through various drafts, and currently is only an oblique moment in a character flash. Our bus does figure, and there’s no way for it not to be prominent when it does, because, y’know, bus. But I felt relieved by this take on it and pretty much everything else, including a group sprawl in the tall grass...

...that seemed obviously influenced by the photo on the Drop City book jacket, viz.: 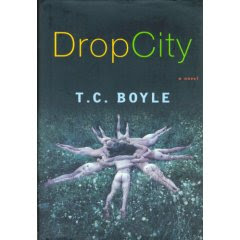 Um, the influence is more obvious in the movie, where you can actually see the images. ANYWAY. Across the Universe is a work of visual, conceptual, and (obviously) musical genius. Julie Taymor is God. She creates worlds. The screenwriters (Dick Clement and Ian La Frenais) figured out such brilliant ways to use the lyrics of the songs, you laugh and get goosebumps at the same time. Know how it’s always a lesser experience (and often an unbearable one) to hear someone other than the Beatles do a Beatles song? Not here. The voices and arrangements are splendid and so well-conceived as action, dialogue, and mise-en-scene that the songs don’t just “advance the story”—they ARE the story. And the astounding production design, camerawork, and editing push the music-narrative along so you scarcely notice that more than two hours have passed by the time Bono does “Lucy in the Sky with Diamonds” over the end credits.

I heard somebody whine that it was “a two-hour music video.” Yeah... 30-odd beautiful songs set to mind-blowing imagery, evoking a fascinating historical moment in an archetypal yet personal way. What’s to complain about?

I'm not saying it's perfect. There's a lame misuse of “Revolution” that falls dramatically flat. You don't really get out of yourself and into the movie much, because it's more like theater. And it's not without cliche or sentimental romanticizing of the era. But this is mere carping.

Favorite moments are hard to choose, but I’d put the lilting, surprisingly touching version of “I Wanna Hold Your Hand” (complete with football-scrimmage choreography) right up there, along with a spectacularly imagined “Happiness is a Warm Gun.” And Eddie Izzard’s fabulous “Being for the Benefit of Mr. Kite” is a supersonic sandwich made of Bread & Puppet Theater, Saul Steinberg, Henri Matisse, the Moscow Circus, and the dream you had last night.

Climb in a seat with your head in the clouds and you’re gone.
Posted by Jasph at 11:55 AM 2 comments: