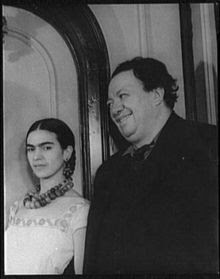 Why do the arts lean leftward, politically? Back when I was more of an ideologue, I just figured: the arts are good, so naturally, artists tend to be on the side of good, and that's the left side, of course. You get older, things get less black & white, and you begin to wonder. Why do most writers, musicians, visual artists, filmmakers, dancers, performers in general, tend to be progressives rather than conservatives? The place of art, at least in modern culture, has often been at odds with repressive powers that be (hence the image of Trotsky's pals Diego Rivera and Frida Kahlo, godparents of this post). Why do contemporary American artists who express opinions about politics and current events almost unanimously deplore the current administration's policies?

First, what's left and what's right? I'm saying that the extreme left end of the political spectrum is anarchy; the extreme right is a police state. More toward the center, liberalism favors equality and social freedom; conservatism favors hierarchy and social order (and the free reign of capital). Is the most balanced view simply moderate, down the middle? I don't think so, because power and wealth tend to reinforce each other, concentrating in institutional elites, so the right’s laissez-faire attitude toward power and capital is only balanced out by moving farther leftward, constraining the abuse of that power. If you have a big fat bossy kid on a seesaw, it’ll take several kids on the other side to get him off the ground. Or you could lengthen that side of the lever away from the fulcrum in the middle and place one underfed lefty on the seat.

Do the assumptions behind my first two paragraphs really hold up? 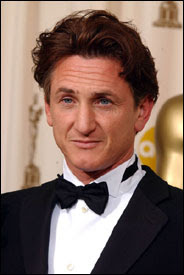 1) I think so. The arts do lean left. A cursory survey suggests that it’s overwhelmingly disproportionate, and going deeper just amplifies that, exceptions proving the rule. For every Ezra Pound defending Mussolini, a hundred poets from Whitman to Neruda to Szymborska spend their lives writing in the other direction. For every John Milius reactionary fantasy there are scads of films celebrating liberal values or satirizing the fecklessness of the powerful. For every Ron Silver strutting and fretting on behalf of the Iraq war, five hundred other actors run lines of leftist dialogue against it. And among musicians, well, the left claims pretty much everybody but Toby Keith and his ilk. Rock & roll is about rebellion, so you don’t get much right-wing apologia in popular music, other than country & western.

2) Maybe. I first started thinking about this when my freshman-year political science prof put communism on the left end of a spectrum and fascism on the right. It doesn't make sense. Communism is an economic construct, and in real life, it’s turned out to be state-run capitalism. If the spectrum is a truly political one, I think it goes from absolute freedom, which doesn’t really exist, to absolute order, which ditto (though not for lack of trying). It makes more sense to have governments like Stalin’s, Mao’s, Hitler’s, and Pinochet's on the same end of the spectrum. So the brief flirtations American artists have had with communism have always been more about reacting to fascist right-wing tendencies in the U.S. than embracing the Party line. Artists who got blacklisted in the ‘50s ended up nearly as disenchanted with communism as they were with McCarthyism.

Maybe there’s a reverse angle on this, looking at why people on the left tend to support and defend artistic freedom (and government-funded grants for artists, art programs, museums, etc.), while people on the right tend to try to rein in artistic freedom and place limits on expression and the public forums for it, dismantling the NEA while they’re at it. The left certainly has embraced minorities in a way that the right has not, and artists themselves are a minority. Minorities are disproportionately represented in the arts, especially music.... My mind is starting to fritz out. I can’t keep these ideas framed to look at them straight on. 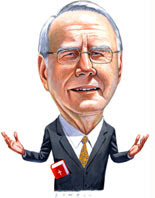 Maybe I’m suggesting that artists are more interested in self-expression than in submitting to authority, a naturally progressive mindset. Is the need to submit to authority conversely stronger in conservatives? I haven’t really addressed what draws someone to the right. In America, often as not, it seems to be either a single issue (say, abortion) or a cluster of such issues coded as “family values,” tied to a conservative Christian belief system (hence, James Dobson up there, damning me to hell). The most vocal advocates for this POV are almost always vocal critics of artistic expression, busily banning books, decrying obscenity in film and song lyrics, etc. When left-leaning politicians reach for conservative votes, it’s usually in this parent-friendly way, demanding warning labels and ratings and cultural crash pants. Conservatives support all these limits, especially where sex is concerned.

That may be it right there. Artists are sex maniacs (or at least like to depict it and talk about it out in the open)--and the left is more sex-friendly, less repressed? Could this alone be the key to the whole question? Freud might say so. But I think Jung would demur. Jung (who was NOT, as Tom Cruise asserts, some big Nazi) would probably say that creativity is linked to the Shadow, and then go back to screwing his patient. And I say, but Herr Doktor, what does it mean if I dream of Susan Sontag launching fireworks from her crotch into the skies over Paris? Which I did. Last night. 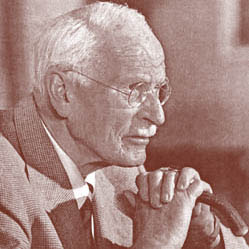 Maybe it’s this simple: Artists are aesthetes, and there’s more beauty in progressive politics. Is there? How can I defend that? Start with what makes something beautiful: balance and strangeness. The balance comes from paradox, irony, making opposites one. The strangeness, which keeps something beautiful from being merely pretty, is the unique stamp of the artist’s personality. Does the left have better balance, more uniqueness? Maybe it better balances individual rights with the needs of the collective. And maybe it’s more tolerant of the kind of eccentricity and diversity that make uniqueness possible.

My brain is a swarm of hornets. I leave it to you to explain it all to me.
Posted by Jasph at 1:42 PM

I've wondered that too! Why creative types tend to be "left"...

I've also wondered why Christianity in politics isn't more about feeding poor people (which Jesus would NOT shut UP about). Or about peace (ditto).

But I don't really understand politics. Like you mentioned the NEA, I have mixed feelings about the NEA. I don't know if people should have to pay for the arts when they mostly don't give a crap about them. Then again, look at all the crap I'M paying for that I'm not merely indifferent to but vehemently against. So I guess the NEA is OK. I esp. like it when it funds art and music things that schoolkids get to get out of class to enjoy. Who doesn't like to get out of class?

It's funny to read the Langston Hughes poems that are all about how great it will be when the U.S. joins the Soviet Union in Communism. They're very enthusiastic! And why not? All those ideals of brotherhood and equality.

On a pretty unrelated note, I like that Beyonce song that goes, "to the left...to the left...all your stuff is in that box to the left" or something like that. Clever.

When things seem to have gone horribly wrong, the way it feels to me lately, I try to stop thinking idiotic fantasy thoughts, like how much better it would have been if Gore had been elected (wait, he was!) and consider other times when things were going horribly wrong but we somehow managed to right the ship of state, and I always land on the McCarthy years. That could really have gotten irretrievably bad. If a few people hadn't stood up to him--and especially if Edward R. Murrow hadn't stood up to him--I shudder to think.

Also, I've decided that although that Beyonce song has a catchy quality, there's a structural misstep in it. It's when she goes into "don't you ever for a minute get to thinkin'..." right before "you're irreplaceable." The chord changes seem completely wrong for what they're following and preceding, so the melodic phrase comes off weak.

But man, she can sing. And I saw that one video she does with Shakira and had to say, Beyonce's hips may lie even less than those of her pelvically truthful Latina counterpart. Unbeyoncelievable. (I just coined that. I'm sure it'll catch on...)

Once again issues that should be so simple are set to spin out of proportion. Multiplied by distinctions and differences to the point where we no longer understand and cannot justly evaluate similarities common to all directed behavior.
I would like to attract attention to communicative value. We can only identify social values as they emerge. Individuals who recognize the communicative value of representive action can be observed as the initial indicators of a tendency. This may be a pre-qualifying behavior which can be identified in personalities drawn to efforts within media culture. Individuals who are aware of communicative value obviously are turned toward the plurality in regard to their actions. This shows an enhanced social conscience, rather than the social singularity of those not as in tune with the communicative nature of action. Gotta go,