Tony Gets His Button 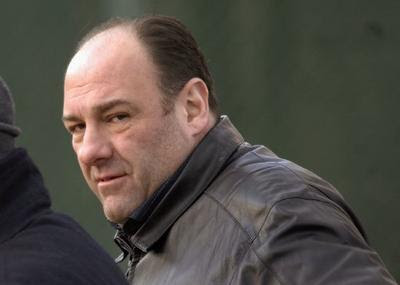 I feel compelled to say three things about The Sopranos:

1. It really is a Greco-Roman myth. The characters embody attributes of human consciousness that are universal, undeniable, horrifying, touching, and self-revealing, which is why they stick with you and make you wonder about them, as if they existed not just in your imagination but in life. They feel more real than many people you actually meet. I never dreamed I’d say that about a TV show.

2. It still has the capacity to shock, after seven seasons of brutality and venality. Anyone who watched the last episode knows what I mean. The big event, only seven minutes in, makes you catch your breath, even though it feels inevitable. In this sense, it’s more real than the news. The Virginia Tech murders were horrible, and I’m not trying to diminish their importance or impact. But my gut response to that carnage was somewhere between knee-jerk revulsion and “ain’t that America,” followed by muted empathy (and then, as media vultures made a mockery of it all, disgust and ennui). We look at the absurd images of the killer and can only wonder why so little was done, how the same society that denied him decent mental health care could so blithely supply him with guns and armor-piercing bullets. It happened out there, and we’re still safe here. But we see in Tony Soprano the primal, practical, dead-eyed sociopath we all could be, if the circumstances of his life had been handed down to us. What a shock, as he knocks out the window of a wrecked car, decides not to call 911, and finishes off a piece of grim business. And it is business. But it’s also personal. It’s revenge. It’s defiance of fate. It’s mythic, a god eating his children. And it’s hands-on. The violence isn’t shied away from, but it isn’t glorified, either. At rock-bottom, the show is deeply moral. It never flinches.

3. The freedom of its storytelling is astounding. Nobody (not even David Chase) could have predicted, back when the show was in its infancy, that its final season would find Tony in the Nevada desert, high on peyote and having a laughing, crying epiphany as he stares into the sun. “I get it!” he cries. I don’t, exactly (is he still lit up by his roulette experience?—“same principle as the solar system”—or has he just grokked the whole Christopher situation in some druggie way?), but I feel the evanescence of his exultation. Drugs have done pretty well by Tony, but he’s still “Comfortably Numb,” as the brilliant music cues have suggested. And we know no epiphany of his will lead to model citizenry or a happy ending. Even as the show takes a breath, with all that slow, expansive quiet stretching off under the desert sky, we can feel the story closing in, ratcheting down, closing off all heroic possibilities.

Plus, Sarah Shahi. Oh, my word. Chalk another one up for the dark, diminutive deities of drama. If this doesn’t launch her out of TV into movie stardom, I don’t know what will. When she brought out the peyote buttons, I could see some of what was coming: Tony would puke, and then have the eyes of his eyes briefly opened. But man, how beautifully the actors played it. Watching her watch the roulette wheel brought the whole stoner phase of my life back like the smell of an old girlfriend’s hair. If you’ve ever done psychotropics, you know how true to life that whole sequence was. And if you haven’t, I bet you still know, which is all the more amazing.

When they first drift into the casino and Tony stares at that slot-machine image of the devil, I had a thought. It’s way too cheap an idea for this show, but not for me, Alice In Wonderlandkind that I am:

What if Tony actually did die last season, and this whole season is him in Hell? So Hell is just being comfortably numb, killing your friends, cheating on your wife, going to funerals, hanging out in casinos, and still having to deal with the mundane details of your job—dumping asbestos in a pristine marshland, for instance, and haggling over a rival boss’s percentage. Hell is just life, except you don’t get out.

OK, they won’t pull that on us. What’s the end? I told Bighead Needleman that the father-son arc must be fulfilled, so A.J. either dies, does something that causes Tony’s death, or somehow gets drawn into the life, becoming the new Christopher. If A.J. kills Tony and ends up blind, we’ll know which myth we’re in. Otherwise, we should probably retreat to Goldfinch’s and look up Zeus and Hera. Somewhere in the stories about them is the story of Tony and Carmela. This one can't possibly end well. Predictions?

Thank heavens for smart, creative, thought-provoking entertainment. Without Jon Stewart and Tony Soprano, how would I have survived these ghastly first few years of the new millennium? Lame as it sounds, and essentially lucky as I know myself to be, sometimes I think they’re all that’s kept me sane. 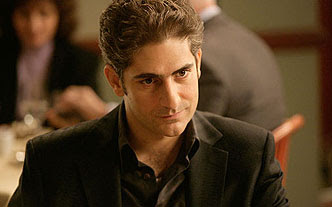 I'm not sure that as a first timer The Button would be so merciful to such a non-fictional character. There are things out there that will eat you up, straight out of the gate, as long as the chemical portal remains open. Man! if the ancient cactus elders don't like you. You'll probably belly crawl as they send roots down through the your sad fucking brain to your soul. Besides you'd be suprised how hard it is to find peyote if it's not in the Spirit for you to.
The whole notion sounds like someones drive-by shooting.
This review is writing at its best. I loved it Howard!

I'm reluctant to admit how spotty my Sopranos viewing has been all these years. And its departure begs the question, "Five years from now, on what brilliant must-see TV will I not be up to speed?"

Same thing happened to me with MASH, Taxi, Barney Miller, and Seinfeld. I'm the opposite of an early adopter. Thank God for Netflix.

One reason I haven't watched Tony and Carmela regularly is the time slot, Sunday night being, inherently, ever since kindergarten, a time of dread and melancholy. It seems the worst possible time window for growing to love people and then having them killed off. I'm especially attached to A.J., who bears some psychic resemblance to my own sons.

This post makes me want to follow my mom's lifelong advice to me and just toughen up.
I could rent all the episodes (as I just did with Freaks and Geeks) and take it like a man.

Oh, Molly, I'm with you on the Sunday Night Dreads.

Paul always gives me this look about 20 minutes into the Sopranos, like he can't figure out why I could possibly be wheezing with anxiety while we're watching one of our most beloved shows.

How I wish it could be shown on Thursday nights instead, when there's nothing ahead but work-free weekend.

Thank goodness for the palate cleanser "Entourage" provides after "The Sopranos." I know you don't watch it, Jim, but it's shallow and funny and everything I need to get my breathing back.

It makes all the sense in the world to me to watch Sopranos and then come on in to work.

I only watch it on the good graces of tapers, so usually on Monday lunch, and it fits corporate life pretty well, except you get to do the things you...

but perhaps I've said too much.

I was trying to figure out what Dan meant by "tapers"--some new technology I'm unaware of, like candles with Bluetooth that burn your show onto a DVD--and then realized you meant people who tape the show. Whew.

The Sunday Night Dreads. My ex had those. Penny used to have them, before she went freelance. It's the impending jobness, right? Man, think how people with really terrible jobs must feel. How do they even get out of bed?

By the way, Tina, I do occasionally watch "Entourage." Love Jeremy Piven, who plays Ari like Robert Downey Jr. would--it's a real, live character. Kevin Connolly or however he spells it, he's pretty good. I even like the kid who plays Vince. But Kevin Dillon and that Turtle guy are just plain unwatchable, for me. I can't stand the actors or the characters they play. They come onscreen, and I instantly feel I'm wasting my time.

Which I guess is part of the point of TV. So I miss the point. I've also missed Freaks & Geeks, Mol. No idea what it is, even. Do tell.

Freaks and Geeks aired for a couple of seasons in the late 90s, It starred Linda "ER"
Cardellini as a conflicted, intelligent high school girl attracted to the wild kids (Freaks) in high school. Her younger brother (a lovable Geek) attends the same school He and his friends struggled to fit in with the Geek culture while being hazed and abused by both the Freaks and Jocks.

For me, it's a dead-on depiction of high school's emotional landscape. The writers and actors deal with drugs, the military, dysfunction, family violence, and sexuality with so much truth and courage.

As for the dread, the source of mine is a vague, nagging sense that I don't have my algebra homework done.

So I guess my Sunday night Sopranos problem and my "Freaks and Geeks" obsession are more closely related than I thought.

Now I'm worried about the lousy verb agreement in my comment.

I'm familiar with Freaks as a phenom, but haven't ever seen an entire episode.

It really got to its fans, though. There's a cult for that show that really identified and bought into it in a way that's pretty rare. I would guess there are fans of it that would not call themselves fans of the medium at all.

What have the creators done since? Anybody know?

One of the writers is Seth Rogen,
who also created "Undeclared" (haven't seen it) and has a new movie,
"Knocked Up."

He's the portly, curly-haired guy who plays one of Steve Carell's friends in
"40-year-old Virgin."

I jusl looked him up on imDb and he's done lots of other writing and acting, too.