President-elect Obama (I keep saying it, can’t quite believe it yet) gave a beautiful speech on election night, outlining challenges we'll have to meet and giving us a big Yes We Can coda. The only firm promise I recall from the speech, though, was to his daughters, whom he addressed directly, saying he loved them and that they had “earned the puppy that will be coming with us to the White House.”

Update: Malia apparently has a dog allergy. So the Obamas are looking for a non-shedder, like a labradoodle.

Fascinating, the way presidential pooches become public relations tools. It’s like we all have psychic ownership, a vested interest in the pet’s development and well-being. And the dog is unavoidably symbolic. 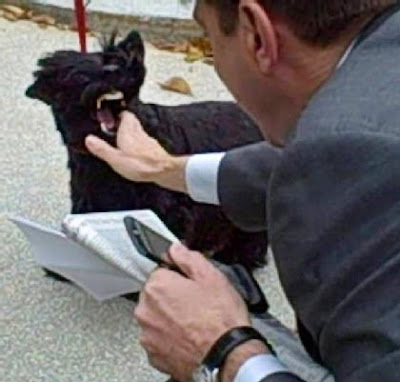 When Bush’s terrier, Barney, bit that Reuters reporter this week, it not only resonated with Bush's relationship to the press but suggested an irritable, undisciplined administration, or perhaps simply a beleaguered one. Vicious? Rabid? The last eight years will have to be put down.

Even if we can’t clearly say what it’s a symbol of, the presence and personality of a pet offer an alternative image of a leader. 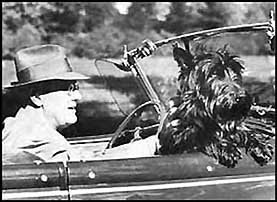 Perhaps the most famous: FDR and Fala. Then there was Nixon’s mawkish Checkers speech, which apparently worked with a sentimental sector of the American public. Oh, and Gerald Ford had a big dog that lounged around the Oval Office. Can't remember the name. I think he called it some non-dog thing like Patriot or something. And Clinton had Buddy. Didn't Buddy write a book during the first term? And didn't he hate the Clintons' cat? 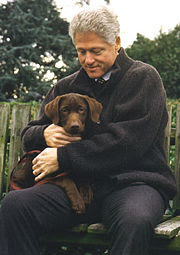 I wonder what the Obamas will name their pet? You can submit ideas on Obama’s new transition site, along with your vision for America. (Nice site, really. Check it out.) Or just post 'em in a comment here. A few starter doggy names…

9. Fala
Pros: Rooseveltian, cementing the parallels between Obama's situation and FDR's. Traditional yet exotic-sounding. Gender-neutral. Can be extended into a Christmas carol refrain.
Cons: Derivative. And slightly elitist-sounding, like you’ve just taken a cigarette holder out of your mouth to say it.

8. Not-Barney
Pros: It’s anti-Bush. Suggests that reporters might not get their hands bitten.
Cons: Kind of stupid. Faintly echoes “Smith-Barney,” which could be a downer, reminding us of the financial crisis.

7. Madelyn
Pros: Pays homage to Obama’s maternal grandmother. Easily shortened to “Maddy.”
Cons: Only works for a female puppy. And the name might not make a sharp enough sound to effectively command obedience. Might turn into Mad Dog.

6. Aunt Fidget Wonkham-Strong
Pros: Literary, from a charming, old Roald Dahl story, “How Tom Beat Captain Najork and His Hired Sportsmen.” Whimsical. Easily shortened to “Fidget” or “Wonky.”
Cons: A little fussy. Again, limited to the bitches. And right-wingers would pounce on “Fidget” or “Wonky.”

5. Captain Najork
Pros: Literary (see previous entry). Military. And an abbreviation from either side (“Cap’n!” or “Jork!”) gives a nice, sharp sound to elicit a dog’s response.
Cons: Strictly male. Also, what is wrong with me?

4. Marty
Pros: Cute. Can be male or female, although it does lean to the former. For a male dog, it's a great name, suggesting MLK without getting aggressively masculine or radical about it. You don’t want Malcolm or Eldridge or even Bill. Marty might also suggest Martin Sheen, the best president we never had.
Cons: No good for a big dog. You’re pretty much stuck with a terrier or a teacup or a weiner here.

3. King
Pros: Classic. A bigger, nobler, more obvious reference to MLK, but also a real, live, good ol’ dog name.
Cons: Only good for a big male dog. And the more you think about it, the less good it seems. This is not the time for a King. If you want to reclaim democracy, name your dog “Thomas Jefferson” or "Lincoln" or “Studs Terkel” or “Joe the Poodle.” Scratch that last one.

2. Hope
Pros: It’s got audacity.
Cons: If the dog dies in office, what a PR nightmare.

And the number 1 name for the Obama puppy is…yours. Post ideas here, and if you come up with a really good one, tell it to the man.
Posted by Jasph at 3:12 PM

Hmm. Does a president have to have a dog? What if the First Family were just cat people? Would they even stand a chance? Sure, the Clintons had Socks, but they had Buddy, too. I'm just askin'. I guess because my personal preference leans toward the feline.

Sorry for the sidetrack. Dog names. I always wanted to name a dog Hoover. For the vacuum cleaner. Because, you know, for the way dogs gobble up anything dropped from the table.

Pooky--every Black person has someone named Pooky in their family.

Ellison--author of one of Barack, ahem, President Barack's fave books, Invisible Man. (also the inspiration for my play, InCogNegro, coming to a theatre near me, Feb 9-15)

Shaka Zulu--ahh, what the heck.

Crispus Attucks--First man to die in the American Revolution. And a Negro!

I'm with you, Lee Anne. Vastly prefer the kittycats. Ours has apparently contracted a fatal virus and it's really bumming us out. Tova, 4yo, beautiful. Bummer.

Anyway, I love the name Hoover, but could the timing be worse?

And my dear Ms. Langford. You gots a play comin'! I love that title AND your dog names.

By the way, my change.gov link to the Obama/
Biden transition site is finally working. No idea why the code didn't take the first three times I tried.

Hey Jimbo, NPR, reported that last week the present canine resident actually bit someone who came up with the intention to pet it. Everyone survive this supposedly unpredictable incident. Weird eh! My offering if the pup is a boy dog would be Jefferson Jeff for short. If a girl I think Freedom Rider, or Rider for a familiar contraction would be a fair offering. Funny I haven't read this blog entry yet, I must need to adjust my collar or rear view mirror or both.
Love Scotland

Jim, I'm so sorry to hear about your kitty.

Yeah, Hoover has some bad associations right now. Well, if we're talking about FDR's Fala, what about Asta, that perennial crossword answer and Nora Charles' dog in the Thin Man movies?

Let Obama know what the first pup's name and breed should be at http://www.nameobamaspuppy.com. Vote in our poll!

Anonymous said...
This comment has been removed by a blog administrator.
7:21 AM

I think he should name the dog "Joe The Dog"

Some other ideas for names...