Books. Remember those? They're supposed to be part of what this blog is about, but when's the last time I wrote about a book here? Well, this is about a bunch of books. In the past six months (mostly in the past three), I've read the following: 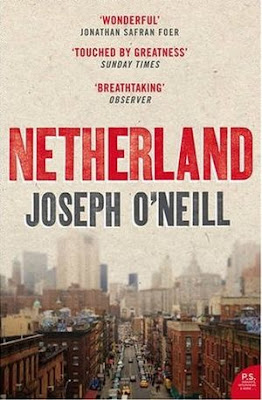 Netherland by Joseph O'Neill ★★★★½
(I loved this novel so much, I started writing one, then began to suspect that my opening was plagiaristically close to that of a novel I'd read a few years ago, so I checked to see, and got hooked again by that all-too-influential opening, and thus ended up rereading in its massive entirety...
The Corrections by Jonathan Franzen ★★★★
East Is East by T.C. Boyle ★★★
Mudbound by Hillary Jordan ★★½
Chronic City by Jonathan Lethem ★★
Nobody Move by Denis Johnson (★★★½) which made me reread...
Angels and Jesus' Son by Denis Johnson (a composite ★★★★)

I read a memoir:

House of Cards by my pal David Ellis Dickerson (must recuse myself on the rating, because I'm pseudonymously featured in the book and heavily biased in favor of the author)

I read a screenplay:

A Serious Man by Joel and Ethan Coen (I give the film ★★★★, but the weirdly flat script ★★--I don't know how they knew they could make a great movie from it.)

I read what I guess you'd call a how-to:

Story by Robert McKee ★★★ (the best thing of its kind, but that's damning with faint praise)

At work, I was researching The Beatles and ended up rereading In His Own Write, by John Lennon ★★★★. What a hoot.

I also read a fat, densely-packed old issue of McSweeney's, guest-edited by Chris Ware--mostly comics, but it took me longer than any of the other books. I'd rate it from no stars to ★★★★★, depending on where you are in it.

I think that's it.

Why list all these? Simply to say that I'd recommend every one of them, except maybe Chronic City, an oddly detached disappointment. And that I was reminded, these past few months, of how thoroughly books kick television's ass. TV had begun to swallow the evening hours with a habitual couchslump, après-boy-bedtime. I haven't cut it out of my life entirely, but I've begun shoving books between it and my face. They almost always win.

I'm back to reading like I used to read: compulsively. Now rereading Humboldt's Gift and loving it. So there'll be more blog lapses. I suggest Joseph O'Neill et al. as worthy blank spot filler-inners. If you've let books slip to the periphery of your busy life, bring 'em back to the center of the camp. It feels good.
Posted by Jasph at 1:41 PM

off to the joco library website to place a hold or two... thanks!

Hello,
I have developed a new clean web 2.0 wordpress theme.

Has 2 colours silver and blue, has custom header(colour or image).
I am curently working on it, so if you have suggestions let me know.

You can view live demo and download from here www.getbelle.com
If you found bug reports or you have suggestions pm me.
Wish you a happing using.

many thanks to [url=http://www.usainstantpayday.com/]USAInstantPayDay.com[/url] for helping with hosting and developement of the theme
notaPauct

Hello, Alicia, and hello, Anonymous. Guess which one of you I like more?

I mean, I'm very proud of you, Anonymous, for developing your new clean web 2.0 wordpress theme with the silver and the blue and the live demo. And thanks for wishing me a "happing using." Very nice.

But Alicia, with her actual humanity, her actual reading of this blog, and an actual BEAUTIFUL blog of her own, The Mayfly (check my sidebar and click), that there is my idea of a commenter.

Thus, although I appreciate your addition to this post and the daily additions to others dating back two and three years, Anonymous, I like Alicia more. So there.

I keep having dreams about that area rapist, and in my dreams he is named Jonathan Franzen, an author whose work I have never read.

first of all, i could barely figure out how the fuck to publish a comment. shwew. i'm here, safe and sound. great. now i forgot was i was going to say. more later. love and lil smokies, mrs. bass

Anonymous said...
This comment has been removed by a blog administrator.
1:07 AM

Anonymous said...
This comment has been removed by a blog administrator.
7:07 AM

thanks for the awesome book suggestions. i imagine i'll love the ones i understand. oh jim. you and your giant brain....

who are all these new friends of yours? anonymous sounds funnier and quite possibly cuter than me. should i be worried?

Beth, I can assure you that Anonymous is no Beth, in cuteness, funinness, or in having-a-better-blog-than-me-ness.

I misspelled funniness. What a riot.