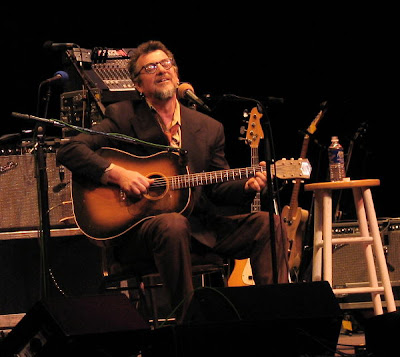 Maybe it's not a great recommendation to say that the first song you ever heard from a particular artist remains your favorite. Greg Brown has written scads of great songs, so it's not a one-trick pony thing. It's just that back in 1997, the poet and translator Geoff Brock (see link in sidebar) asked if I was a Greg Brown fan, and I had to admit I'd never heard of him. And Geoff seemed shocked, like I'd been living under a rock. Which I had -- rock AND ROLL, you snooty elitist folkie academic bastard! [insert heavy metal hand gesture here]

So Geoff says, "Oh, you gotta hear this," and puts on "Brand New '64 Dodge." It's slow, with the guitar intro walking down into a root cellar, where Greg's voice lives. I mean, that first booming growl and I was hooked.

Money comes out of Dad's billfold
Hankies come out of Mom's purse
The engine hardly makes a sound
Even when you put it in reverse...

The song is every suburban boy's childhood in Camelot, just before the end of Kennedy-era America ("It's November of '63 / And the brand new Dodge is a '64"). If you're a baby boomer like me, that time resonates so hugely at the end of the song, your coming-of-age years start flickering and floating through you like a Zapruder film of the inside of your own psyche. It's just a staggering piece of songwriting.

I love a lot of Greg Brown songs (he's put out nearly 20 albums), but nothing since has come close to that first listening experience.

His daughter, Pieta Brown, is a rising star on the folk scene now. She sounds like a female Bob Dylan. My daughter saw the two of them perform and said Greg was so drunk nobody could understand a word he said or sang, and then Pieta came out and blew everybody away.

Greg is married to Iris Dement (I'm still not a fan of HER voice, despite its Grand Ol' Opry verve -- but I wanna be a fan, because Ted Kooser is). Greg and Iris live here in Kansas City. He still sings like a thunderstorm over a cornfield somewhere in Iowa. And "Brand New '64 Dodge" is still on my list of favorite songs. At least in the top 20 or 25.

Is "Pieta" Latin for "Pity"? Cause if she sounds like a female Bob Dylan, I do pity her...

Stacey, I can only refer you to a previous post, "Bob, Bob, and Bob." Maybe archived by now.

Actually, her voice goes down a little easier than Bob's, if you have trouble with Bob's. As you do.

When I think of all the singer-songwriters who owe their careers, or at least a big part of their style, to Bob, I think he should get a percentage. Mark Knopfler, Tom Petty, Eric Andersen, probably a dozen others. Pieta comes from a long line of beneficiaries.

Hey, what's this LotionPalooza? Is that through Ticketmaster?

What a nice little write-up, I should check him out sometime. Him and this Dylan guy people keep talking about. One of these days...

As for anonymous up there, I think it's obvious h/she's high. Four exlamation points in a row? That doesn't even make sense.

when i was a junior in high school, my groovy creative writing teacher came into class one day with his shades on, closed the blinds, shut the door and pressed play on his boom box. he played two songs i remember that day that blew my mind and opened my world a bit: "The River" by Bruce Springsteen and"Brand New '64 Dodge." Thank God for those groovy writing teachers...

Jas! When ya coming down to Fateville to visit your old pal? I'll play all the Greg Brown you can stand and buy you drinks till you can't.
--Geoff

If more people had creative writing teachers like Jen's (or like Geoff, for that matter), the world would be a very different place. Think what a difference a teacher like Jen's might have made in the life of young Dick Cheney.

Lo, Geoffrey, it has been too long. Not sure when we'll make it down Arkansas way, but I hope you and the family are well. How's that little Ravi? How's the job? BTW, I tried to emulate you by installing the Cost of Iraq War counter in my blog, but couldn't get the HTML right. I'm lame, but I try.

Everybody interested in entertaining bloggery should check out Heather Armstrong, now in my sidebar. Like me, she escaped from the Mormon tradition into real life. Unlike me, she designed her own website, runs it off her own server, and makes money at it because her "Valedictorian of Bottom Feeders" blog is so freakin' good.

I'm still waiting for the checks.

I have also spent a good bit of time out in the midst of the hawkeye praries. After reading other comments, I've decided you really need to get down to Fayetteville, my home is less that an hour from Dixon Street. I'd love to meet Geoff and if you bring the family I'll treat you all to Gator Golf down on business 71 highway. Here's to one at Georges Majestic!