Sorry, Jen, missed yesterday. So, a two-parter today. First, a haiku, then a poem about that haiku. What about these two poems is All About Me? Well, the first suggests the union of opposites (my core aesthetic principle) and how an awareness of that union extends consciousness beyond immediate experience, out into the world, into the life of other things, forward and backward in time.

But talking about haiku is like smelling a flower with Vix inhalers jammed in your nose. Let's just have it (and remember, it's a translation, so it doesn't follow the syllabic rules for haiku in English):


on the one-ton temple bell
a moon moth, folded into sleep
sits still


That's by our 18th-century pal, Buson. It's probably one of the most well-known haiku among American readers because of Billy Collins, our most widely-read contemporary poet. Collins is funny and makes accessible poems out of everyday subjects, imbuing them with a calm philosophical depth under slangy, sometimes showily metaphorical surfaces. He's a Buddhist. I love this next poem for the connections it makes between literature and life, and for the way it shows how immediate experience can transform your ideas or beliefs. It also shows how things get stuck in your head. Right now, I've got "Hideaway" by The Weepies stuck in mine. Maybe I can dislodge it by typing up this poem. And uploading a photo... 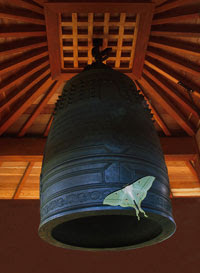 Today I pass the time reading
a favorite haiku,
saying the few words over and over.

It feels like eating
the same small, perfect grape
again and again.

I walk through the house reciting it
and leave its letters falling
through the air of every room.

I stand by the big silence of the piano and say it.
I say it in front of a painting of the sea.
I tap out its rhythm on an empty shelf.

I listen to myself saying it,
then I say it without listening,
then I hear it without saying it.

And when the dog looks up at me,
I kneel down on the floor
and whisper it into each of his long white ears.

It's the one about the one-ton
temple bell
with the moth sleeping on its surface,

and every time I say it, I feel the excruciating
pressure of the moth
on the surface of the iron bell.

When I say it at the window,
the bell is the world
and I am the moth resting there.

When I say it into the mirror,
I am the heavy bell
and the moth is life with its papery wings.

And later, when I say it to you in the dark,
you are the bell,
and I am the tongue of the bell, ringing you,

and the moth has flown
from its line
and moves like a hinge in the air above our bed.


The first time I read that, I thought, ah, Billy Collins isn't just an entertainer. I'd long suspected that, but now I knew it in my resonating bones.
Posted by Jasph at 6:28 AM

There is one day of spring lost in years of spring,
where the leaves hang shriveled and bat-like on their branches.
Within the cacoon silk worms sing
till ghosts can be spoken to during mid-day
and the present is lost in the expected color.

this is my favorite...how you gonna top this one? i think i'm hooked on these words, a perfect digging-in-the-dirt-mantra. thanks! and i love BC's response to the call of the haiku and reliving it in all his ways. i think i'll paint a response and post it. mmmm.

James, you should be citing and getting permission from the photographers ... that image was made by me, ray rasmussen, raysweb.net
Ray

Hey I'd like to thank you for such a great made forum!
thought this would be a perfect way to make my first post!

Sincerely,
Monte Phil
if you're ever bored check out my site!
[url=http://www.partyopedia.com/articles/monkey-party-supplies.html]monkey Party Supplies[/url].

Hello. My wife and I bought our house about 6 months ago. It was a foreclosure and we were able to get a great deal on it. We also took advantage of the 8K tax credit so that definitely helped. We did an extensive remodeling job and now I want to refinance to cut the term to a 20 or 15 year loan. Does anyone know any good sites for mortgage information? Thanks!