So, I lost my day job. From the inciting event to the wrap-up of the terms of my "retirement" (to which terms I acceded yesterday) took exactly three months. And what a quarter it was.

I got sick in the early throes, immune system no doubt depressed, a brief flirtation with death-by-sepsis that followed an inflammation of my--who knew?--carotid artery sheath. I take that to mean "heartsick."

And one month into it all, before there was any hint that it might end this way, I celebrated my 30-year anniversary on the job. I remember saying to the group of writers and artists gathered for the party that I didn't want my remarks to sound like a retirement speech, but that, then again, "you can be about to retire and just not know it yet." Nailed it!

30 years of fun and creativity and collaborating with some of the coolest people on earth and maybe caring just a bit too much, and it's over. So. What's next?

I don't know. I have another consulting job in June. I'm working on a book, a couple of scripts, and taking, as they say, some meetings with bona fide literary agents and publishers. So I hit the ground running. But now I'm skidding through 30 years of accumulated office detritus. A few of my darling co-workers stuck around after hours last week to help me box it all up. It filled a friend's pickup truck (seriously, getting the last box in was like playing Tetris®. Now with profanity!™). There was no time to sort while packing, and my home office was already pretty crowded. Now it looks like something out of Hoarders. 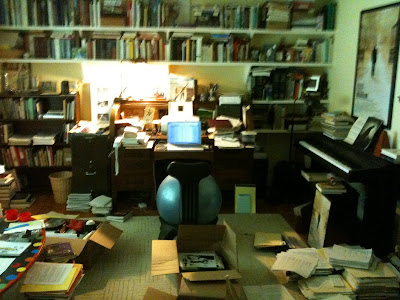 I had a manila folder for every one of those 30 years. Back before I started storing stuff on hard drives, I kept copies of everything. Thousands of jokes, little verses, names for products, sell-lines and slogans, new business ideas, memos, thank-you notes from editors, consumer letters, goofy poems to read aloud at people's birthdays or milestone anniversaries. The early stuff is either hand-written or typed on a Smith-Corona (and then on an original Mac, saved to flexi-disks I can no longer access), so unless it got accepted and applied somewhere, the writing only exists in these photocopies or on scribbled 3x5 cards. And I'm jettisoning almost all of it. I put eight grocery bags of paper out for the recycling truck yesterday.

It's weird, but the handwritten-ness of some things makes me unable to pitch them. I found two pages that I evidently submitted for a 1990 assignment to predict the next decade's big changes. If it were a Word document, I'd just pitch the hard copy. But it's the only existing version of this thing. You can see some of it here, with a couple of jokes from the brainstorm bowl AND a "modest proposal" I wrote when writers were asked how we could help the company save money back in the mid-90s. 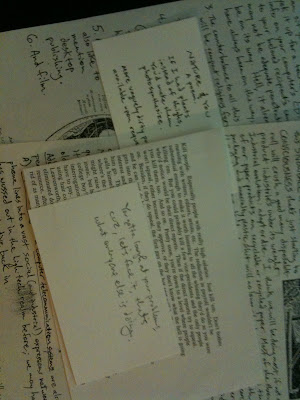 Since Blogger loaded that photo sideways and you can't read it anyway, the cost-cutting proposal starts out, "Kill people." And it goes on from there in Swiftian mode. My predictions included environmental trends, "rampant religious fervor," musings about computer networks (I was still moonlighting at CompuServe in 1990), and "I would also like to mention desktop publishing." The 3x5s say, "You gotta laugh at your problems, cuz let's face it, that's what everyone else is doing" (a little Cope & Encouragement workin' for ya there) and, under the title, "NATURE & YOU: A Poem," this beautiful Message of Love:

If I had plants
instead of thighs,
you'd make them
photosynthesize.

Hadn't heard that rhyme before, and haven't heard it since. I should do a Wikipedia entry on it.

There's a long to-do list before I get to that. It's a big world out here and I want to do big things in it. Not sure if I'll have time for blogging along the way, so there may be even less to see here than usual.

But never doubt my love, O faithful few readers, commenters, lurkers, and drive-by glancers. Hold me close, ya tiny dancers. You know I dig you like clams.

Available for parties, partnerships, and odd jobs befitting a guy besotted with words, words, words.
Posted by Jasph at 8:30 AM

I hope that a little (or a lot, I won't be that choosy) of whatever you're working on leaks out here in some wordalicious way. Love you, bro.

JasP, it's not the same without you there, but I have a premonition that the world as a whole is already better with your words spilling into the universe at large rather than the black hole that is Prodo. Can't wait to get together and talk screenplays with you. My current rewrite is taking longer than expected, which should have been, well, expected. So goes it. Will talk soon!

I bought a card for you three weeks ago and just cannot find the words to fill it. If only you were still in the building, I would have called you for help in finding the right words to say how sorry I am to see you go, how thankful I am for having had the chance to work with you, and how grateful I am for having struck up a friendship with you and your lovely wife.

As I've told you before, you truly are one of the most talented writers I've ever met. I know big things are on your doorstep. I hope to see you soon, in the company of our other mutual friends. Hopefully by then, I'll have that card ready to go.

All my best to you.

Everyone does. It might even be ubiquitous, the missing. Not sure.

I still can't believe it. I'm still a little speechless. We all miss you. We also know that you will do great things.

Let's see...brilliant, original, forward-thinking, creatively fearless--nah, we wouldn't want THAT guy on our platform to success, would we?

I haven't stopped by your little corner of the internet in awhile and this is what awaits me upon my return? Wow, just wow. Perhaps I can sum up my view of your situation with a simple mathematical equation.

Gadzooks, I love you people. Tearing up here a little. I keep thinking I'm past that, I'm moving on, but every once in awhile, the loss just smacks me upside the head--and the gratitude, too.

How's this? I ran into a former co-worker who used to come over from marketing/advertising to play with us in our brainstorms, back in the early/mid '90s. He's now president of one of the biggest agencies in the area, has a beautiful office in Lawrence, and within two minutes of talking on the street was quoting a note I once left on his desk:

Pansies always stand for thoughts.
Panties, too, I've heard.
You've missed our last three brainstorms,
Ergo, you are a turd.

That's from at least 15 years ago--and he still has the note. After a tour of the place (Collaboratorians have it pretty good, but these guys have a whiteboard that electronically flips down and becomes a slot-car track), he said: "You should come out, talk about possibilities, maybe give my Creative dept. a kick in the pants."

Anyway. There's lots to do out here. Hope to see some of youse in the very very neary near future.

Hey HoseNose, WTF? You are really following in Bill Cuningham's footsteps aren't you? Didn't he get the boot early, or did he last forever?

First things first, you have to get a real email address now, then send it to us.

I just happened to check in on the THS site, saw you were the featured personal website, I went to it and then WTF. Well, I've lost jobs before, and everything got better, always! Well, not always the sex, but the jobs got better.

It's getting late bro, so I will tap in when I get some time, best to Penny.

Jim,
Sorry I'm late reading the news.
Pretty shocking, very sorry it's happened to you. Is it a conspiracy so many of us in this family find themselves no longer employed? It just makes our hill tougher to climb. In my own little way, I climb everyday. I know that you'll find the proper medium to say what you want to say. Keep pluggin'.

Didn't know you were blogging again. Yay!
So, yeah. . . what to say about your departure? Still haven't figured out that one. All I know is that the Howards are collectively the most talented family I know. I have a good feeling that this year will bring you and Joy more opportunities than either of you imagined. Best to Penny.Hope you'll blog about your successes.

I was recently in KC defending myself in a deposition
and passing the blame when I heard about your situation.

I'm sure you have more than enough irons in the fire, but if you're ever interested in submitting work to Ag, or recycled, I'd be more than happy to work with you.

Yeah, your home office was a mess! It seems you needed more shelves to keep those papers and documents in an organized manner. Also, I think it would help if you un-hoard your stuff, to make this place conducive for working. I hope you were able to get that consulting job, and that things went well for you since then. Have a nice day!