This five-year-old laptop is giving me fits. Earlier today I shut it down and sat here looking around my office, which doesn't look much better than when I photographed it in May for that last post. A mess. I've been too busy writing and trying to sell myself to tidy up.
On a shelf, I saw some old notebooks. I pulled one down, opened it up to some notes on gnosticism from a lecture I went to in the early '90s, and found this:
Moses supposes
his gnosis Jehovah's,
but Moses supposes theistical-ly.
For nobody's gnosis
is strictly Jehovah's,
as Moses supposes his gnosis to be.
Semi-clever, but "strictly" is a sonic wrong note--it needs something that sounds like "posies," as in "posies of roses"--like "mostly," maybe, but the sense isn't right. I struggled with it there in the margins, writing a list of possible words to rewrite the thing around:
knows
chose his
psychosis
hypnosis
shmos (shmoes?)
closeness
discloses
I'd have no recollection of having written any of this if I didn't have the notebook, which takes me back to the time and the place: 1994, a conference called Body & Soul. 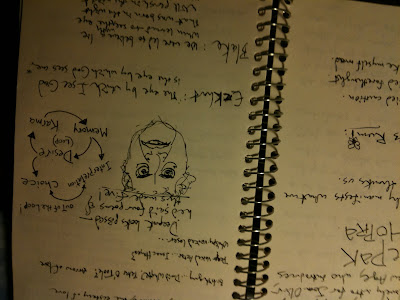 Isn't it handy, the way my iPhone photos arbitrarily load upside-down or sideways? Nice. Flipping pages, I see that Deepak Chopra gave the keynote and told a story about his friend Bob, who got electrocuted on top of a house, fell 15 feet to the ground and landed on his chest, which defibrillated his heart. "He was dead when he fell off the house. The fall brought him back to life."
I didn't write down what this story was meant to illustrate, but I instantly connect to it. I got zapped off the top of a nice, homey career, hit the ground, woke up, and starting running.
What I've done since May:
1. Wrote two big fat humor book proposals--chapter outlines, sample chapters, market & promotion stuff, the works. Two publishers recently expressed interest, but my agent thought I had a deal at Random House in July, and that fell through. So we'll see.
UPDATE: Mr. Agent called to say that Sourcebooks will publish my Tea Party lampoon next fall. The advance is small, but the royalty structure looks good. I'm thinking pseudonym, supporting the book with a political satire blog.

2. Did a couple of consulting days with Infinium in June, working to map out the future for a big local bank. More fun than it sounds like it would be.
3. In August, I hooked up with a former Sprint VP and another business genius to develop a start-up idea. We entered a venture capital contest (mainly to give ourselves a deadline to develop a pitch, for which I wrote and directed a video, among other things), but did not win. We're now working on the business model, web content, and other stuff. These people are so smart. I've learned a ton.
4. Started Hebrew classes. Penny and I are trying to keep with Jonah, who's in Hebrew school now and will be studying for his bar mitzvah over the next four years. Man, it's a mindfuck to study a new language. Spanish in high school was like eating flan compared to learning Hebrew at my age. But I can feel my old language-learning muscles stretching and flexing. It's cool.
5. Adapted a novel by another of my agent's clients. The script is now in the hands of a director who just sent me another set of revisions to do. I'm 50% assured that funding is just around the corner and this won't be yet another spec script thrown down the rabbit hole. The other half of me suspects that it'll all fall apart, as happens far more often than not. The novel, by the way, is called Keeping Time, by Stacey McGlynn.
Turns out, when I don't have a day job, I can write a script in less than six weeks. It used to take me a year, starting and stopping through weekends and evenings.
6. Started a novel of my own, which is really the only thing I want to work on right now. It's going to be a very funny, very sad, very vicious corporate satire. I'm now into the third chapter and completely in love with the first two, one of which is nearly 50 pages long and delights me every time I read it over.
I have to keep reacquainting myself with it, because the search for gainful employment takes a lot of time and energy. I try to accomplish something every day toward that end, viz.:
7. I've been doing some freelance brainstorming and copywriting for a local brewery, which I've really enjoyed.
8: Interviewed at a big marketing/ad agency. Feedback has been encouraging so far.
9: Reconnected with a friend who owns a web design company, and I may have a "freelancer with benefits" deal there, which would really take the worry out of the Damoclesian health insurance sword that's hanging over the end of the year.
Between those last three things, I think financial survival is likely. And if the script can just get a green light, which my agent seems to think will happen early in 2011, or if somebody says yes to one of the books, I'll breathe easier.
In this old notebook, I find the following quote from Elizabeth Roberts, whoever that is:
"To be a human being is to be a swinging door. The inner life and outer life must connect."
I scribbled in the margins, "Also, if you get too busy rushing in and out without paying attention, you'll smack yourself in the face."
The wolf is still at the door. But I do think my inner and outer lives are connecting, especially across the pages of that novel. And I have reason to hope that everything I've done these past six months will make it harder to blow the house down.
Moses supposes
what blows or bulldozes
his house is neurosis or anx-i-e-ty...
Prognosis for Moses?
His prose comes up roses,
if Moses lets goeses and shows he be me.
Some of you have been very supportive during this scary stretch of time. And I love you for it. You gno who you are.
Posted by Jasph at 9:07 AM

I'd love this post even more if I weren't getting so jealously hung up on the "I can write a script in six weeks now" part : )

Yeah, Sarah, imagine that every day is a weekend day, or one of those PTO days you take to work on your own stuff. That's what it's like, except for the daily checklist of "get the wheels under it" activities to avert bankruptcy and homelessness come 2011.

If it weren't for that stuff, I'd probably be half-done with the novel, too. It's amazing how much writing gets done when you have time to get lost in it. I look up and four hours have gone by, and I've had no other thought in my head.

For a jump-aroundy monkey-mind like mine, that's going some.

PS: Read first half of your new draft. It moves right along. And I just love this heroine of yours. I just hope there's a young actress who can play her. So few young actors seem like they have any interesting life experience to draw from. They just look like people who spend all their time looking at phones.

Maybe Jennifer Lawrence, like you said. Or maybe, maybe Emma Stone. Who else has the chops?

Who says unemployment is only 9.86%? My spouse and I subsist on pensions alone (since 1994), and four of our children (we have four) are presently unemployed.
No big deal. Each of them brings smiles to our lips and songs to our hearts with their stories and keen observations on life and the world around them, and us. Hope remains, and life is good. I just gno it is!

Hi. This is an odd request. My mom found this card that was given to her years ago called, "The Official Hospital Songbook." She was looking at the back of the card and reading the about the author, which I think was you? Well, she saw this part, "Be sure to look for his latest hospital hits, which include "Scalpels in the Night," "I Wanna Hold Your Pan," and "Aaack the Knife." and my mom has been looking for them ever since. She even went so far as to call Hallmark who said they remember the cards. Since the internet, who I thought knew everything, has not spit up the results she is looking for, it has become my project. Do you know where I can find the card(s) that have these songs in them, or just the songs themselves so I can start doing other things again? :) Thank you for any help you can offer. ~ Nicole (aleryan@gmail.com)