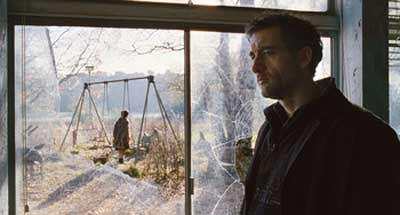 I'm not sure you can find a more perfectly realized dystopian world on film, and there have been some great ones (A Clockwork Orange, 1984, Brazil, the first hour of Minority Report, 28 Days Later -- isn't that the title of that great horror movie a couple of years ago, the one about the rage virus? -- to name but a few). I swear, this beats 'em all. I was sucked into it from the first scene, and never doubted it to the very end.

There's been a lot written about the uninterrupted eight-minute shot, and how Alfonso Cuaron rehearsed cast and crew for twelve days to get what may very well be the most complicated combat sequence every recorded in one go. I was all set to be amazed by this fabled shot, but was so caught up in the movie the first time that I completely forgot to look for it. The second time, I could barely believe what they pulled off in that eight minutes. It's as masterful a piece of directing, design, effects, and camerawork as I've ever seen. Gotta get my hands on a script, so I can see how much of the finished film is in the screenplay.

There's also the slowest yet most suspenseful chase scene ever, involving a car that has to be jump-started. And Clive Owen is superb. And Michael Caine is sublime. And Julianne Moore (spoiler! read no further if you haven't seen it!) does one of the best jobs of dying on film since my brother in Full Metal Jacket.

There's a topic for comments: Great film deaths. Who died and made you remember it?

I seem to recall Kevin Spacey's eyes going really dead in L.A. Confidential. I wonder if that was all him or if they did something in post-production to enhance the effect?

Probably my favorite film death of all time is the old Inuit guy in A Map of the Human Heart, alone on an ice floe, imagining a reunion with the woman who's been his soulmate since they were kids. Can't remember the actor's name. Jason Lee? Is that right? Anyway, it's not so much his performance as the cumulative effect of the story. Kills me every time.
Posted by Jasph at 2:08 PM

I can't really think of any great film deaths. Okay, Bjork in that one movie she did. Also, the long death of Tom Hanks in "Philadelphia." Easy answer, but still.

I just want to talk about Clive Owen some more. How hot is he?

Good point about Clive Owen. I guess. You should discuss it with Stacey over here on this side of the wall. She also has a case of the hot Clives.

What is it about him that's hot? He's not the usual leading-man-lookin' guy, really. Older, for one thing, and craggier. More regular-guyish.

Maybe it's just a relief not to have to watch one of those young, taut, gymnasium-polished blokes try to act. Clive Owen doesn't have to try. Man, can that guy act.

Does talent equate to hotness?

Clive gonna get nominated, if there's any justice, which,of course, there isn't.

Maybe Juli and even Michael Caine, even. Just great beginning to end, as you said. I had to think back to figure out where the 8 minute bit was.

Wasn't the deer in the school cool?

I've heard good things about this movie ... thanks for the encouragement to get off my butt and go see it. I've heard even better things about the P.D. James novel on which the movie is based.

Great film deaths? James Caan as Sonny Corleone in "The Godfather." It's memorable, you have to give it that.

The deer in the school, the kitten on the pantleg, the dog in the ditch, the pig on the tether, the smoldering cows...

You could probably write a dissertation on what nature means in a world like that. I think I could get a master's thesis out of Pantleg Kitty (soon to be a licensed lunchbox character), something about transition shots that work on you subconsciously, the way metaphor does.

Lee Anne, my mom would never see a movie like this, but has read everything P.D. James ever wrote, and was amazed that anyone would think to make a movie of this particular novel, which she described as completely atypical for P.D. James. I wouldn't know. But I wonder if this is a movie I don't want to spoil by reading the book.

I've probably spoiled it for Lee Anne by talking so much about it.

Next up, "Pan's Labyrinth." Must be the year of the Mexican director.

Yes, I'll go with "really hot." Or even, "unbelievably hot." Next to Clive Owen most other leading men look like pretty little spoiled baby girls.

Ooh yeah, I forgot about the deer in the school. Loved that.

Hey Jim, In the movie Little Big Man, the old chief concludes his days are at an end,climbs to the top of a hill,sings his death song,then lies down on his elk robe to wait for death. Any of us who have seen this film know that it starts to rain and finally he sits up, says "Sometimes the magic works and sometimes it doesn't." He and Little Big Man return to the tee-pee still cracking jokes. The death that really occured here,as the film lets you know,is of greater significance,the passing away of a peoples way of life. On other fronts, I have always liked the robot/android deaths portrayed in films like Alien, "God, why Won't you die." this and the many other strong wills of these imaginary entities seems embody a very stong emotive affect. I've cried at least twice at the funerary cremation after the jump into the wolf pit climaxing the Vikings?Kirk Douglas film. I'm beginning to think all the suggestions of death are very curious and made even more so by awareness of personal death. I'm dying to know what you think! SPH

I'm just here to vote for the hotness that is Clive Owen. lol