And it's Pez at the wire. Pez by a quivering nose. Pez triumphant. 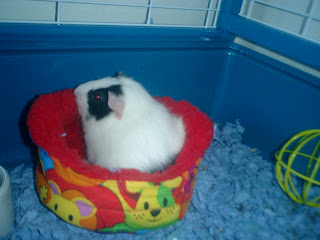 I tell ya, she's just the most darlingest most cutest little turd-eater you ever saw. Pez is the Platonic ideal of all guinea pigs, what with her patchwork coat and her veiny pink ears and her charming timidity and her perfect name and her scrabbling about in a manic panic every time you reach into her cage to get her out so she can sit in Jonah's lap and calm down and make the most delightfulest contented chirring noises ever uttered by earthly rodentia.

Her toilet habits suck, though.

I have now been given to understand the whole yum-yum, this-my-shit, hollaback girl narcissism of eating one's own poo, if one is a guinea pig. See, guinea pigs are more highly evolved than we are, so they don't just crap from one orifice. Nay, rather, they also excrete delicious, nutritious pellets "from a small sack near the anus," according to a guinea pig website that doesn't know how to spell "sac." It's a sac, right? And its special turds have apparently been processed by the animal's gut to make available certain nutrients that couldn't get got the first time through.

So it's not coprophagia in the strict sense. I don't think she gets off on it. But she doesn't seem to be ashamed of it, either. I can't really read her, emotionally, except for a general state of terrified cluelessness, with bouts of contented chirring, and food pellet/hay/fruit/poo noshing. Lord knows she has an abundance of poo to choose from. I think she pinches one off every twelve seconds or so.

Sing, Muse, of pigs from Guinea,
Who chirr, but never whinny,
Although they eat some hay.

They also eat eat crapola
As if it were granola,
Which seems a little gay.

Our pers'nal guinea pigger
Is Pez, as dear as Tigger
And cute as Tina Fey.

She comes here to delight us
And probably won't bite us,
But if we're mean, she may.

To Pez! Thou art so wack!
Thy lunch is in a sac(k)!
We love you guinea-way.

Lo and behold, at 2:30 a.m. on January 31st, Jonah Wilder Howard turns six years old. Which means his sister Emily Joy will be 28 in exactly one week. How in the world did this happen?
Posted by Jasph at 6:45 PM