Ted Haggard, Back On Top 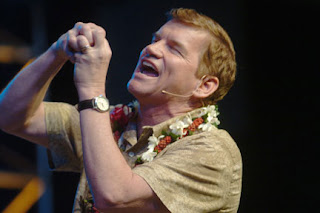 So, three weeks of "intensive counseling" and Ted Haggard is as straight as Mike Jones's beeline from hotel room to bank. Freud works in mysterious ways.

You gotta wonder what kind of therapy Ted received. Could he possibly have ventured outside the fundy paradigm for some bona fide psychoanalysis? Did he ever get anywhere near the unconscious? Oh, who am I kidding...

But how might various therapeutic schools approach Ted's particular issues?

Freudian: So the only image you recall from the dream is of you and your friend Mike bowling by the Washington Monument?

Jungian: It's your mandala, Ted. You can draw it however you want. I'm just saying you've got pens and crayons here -- why not zip up your pants?

Gestalt: Of course, you're upset. That's a lot of meth to misplace. What? The ball-muzzle makes it hard to understand you...

Reichian: Breathe, Ted. Breathe. Now, talk to the empty chair. Yell at the chair. Give the chair all your anger... Ted, stop humping the chair.

Cognitive/Behaviorist: Uh, Mr. Haggard, we know you have the money. Why won't you pay your bill?

Pastoral counseling: Praise the Lord, you're cured! Just try to avoid any scripture with a rod or staff in it. And the Song of Solomon, of course. You know how you get.

Apparently, the church has suggested that Ted's healing will proceed more smoothly if he moves out of town. Ted and his wife say they may both get masters degrees in psychology. I just saw the documentary "Friends of God," in which Ted claims that the sex lives of evangelists are better than other people's, evangelical wives more satisfied, etc. Perhaps the Haggards will offer couples counseling to help others have what they have.

I looked back at my previous Ted post and found that Dan left a comment. Sorry I missed that before. Point taken on Ted's financial exploitation of his flock. I probably have less sympathy for people who fall for this kind of crap than I should. I tend to think that when a guy professes Christian piety, yet seems both hateful and insane, people should be able to see through him. But it doesn't necessarily follow that they get what they deserve for being less than perceptive.
Posted by Jasph at 6:53 AM

It's kind of like the people who are so loyal to the comics. You don't think about them until you move Marmaduke, and then... then you see there are more than you thought, and they are waaaay into it.

A beautiful analogy. Just as the teachings of Jesus are all about love, every Marmaduke cartoon is essentially saying, "Gosh, the ungainly, somewhat anthropomorphic ways of this big ol' dog sure do complicate things."

Fear of snakes is instinctive. We are schooled to not tread near them if we know what is good for our souls. They (in picture form) have even been blamed for the initial expulsion from Eden. Fear of women is not instinctive. Control issues (a basic neurosis) have led to putting "Her" into the same dark category as the snake that has somehow crawled between men's legs. Wha-llah, an unatural view of human sexuality,a view that is repressive and spiritually damming,one that attempts to deny and restrict something that 'just won't be denied'
Relationships are not instinctively feared. There is confusion as to the balance of loss and gain that plays havoc with individual singularity. I say we stand to gain more by giving up those aspects of singularity which can not be truly possesed. This is a natural sexual imperitive.

Scotland, brother (may I call you brother?), I'd love to meet you someday. You make my deep pal Jas P. sound shallow.

Can you comment on Anna Nicole Smith's passing? I'd love to hear about it in a way that I only sorta understand.

Have you seen the film "Jesus Camp"? if not, i think it's worth seeing despite the stomach ache it'll give you...that would be a whole other topic. anyway teddy gives a couple random, all-over-the-place sermons with jokes (that seemed to give insight to his inner crazy workings) for the young jesus warriors in training.

As my readership expands almost into double digits, I find I can't keep up.

Get out the lotion!