What moves you? Ever had an ecstatic experience in a movie theater or listening to the radio? Think back to a signature moment of artistic expression that overwhelmed you or cracked you open or revealed you to yourself in some profound or salient way. What was it? Is there a movie or song or piece of writing or painting or speech or performance of some kind that seemed, at the time anyway, to change your life? Can you say why?

I’ve had a few, but I’ll pick just one. In 1986, my older brother was struggling with some personal demons and a mess of a first marriage. He was in England for several months, making a movie. I was here with a family and a job, and couldn’t really do anything to help besides listen and offer the occasional supportive word over the phone. So I did. He must have run up a staggering trans-Atlantic phone bill. We’d talk for hours. I also wrote him letters, mostly goofy stuff with little cartoons, jokes, fake articles about the movie he was making, that kind of thing.

That spring, I went to see “A Room With A View,” a Best Picture nominee for 1985 that had finally made it to Kansas City. If you haven’t seen it, it’s an adaptation of a literary novel by E.M. Forster, depicting a stiflingly mannered Edwardian English society (as well as a magnificently photogenic Florence, Italy), mostly from the POV of a young woman on the verge of marriage. It sounds dull. It’s not. 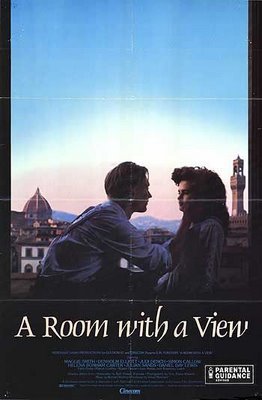 I saw the film at a small art-house theater just up the road from the Plaza area of The City of Fountains. (Not Rome; Kansas City. We have more fountains than Rome, you know.) I added to the municipal waterworks by crying like a hydrant as I came out of the theater. Something about the opening of this young woman’s eyes and heart, the triumph of true love over propriety and duplicity, the yearning honesty and soulfulness of the man she ends up marrying (and of his father, played by the splendid Denholm Elliott) — I don’t know, it just hit me with tremendous force. As I walked away from the theater, I was hyperventilating. I couldn’t move my mouth. My hands were numb and curling up into claws. I briefly wondered if I might be having a stroke or a heart attack, but I knew it was just a physical response to the emotion brought up by the film.

I got in my car, breathed slowly until I could open and close my hands, and then drove straight down to this big splashy Plaza fountain, parked illegally, jumped out of the car and into the fountain. I just stood there, letting a sculpted horse spray water on top of my head for a minute or two. And as I climbed out of the fountain, soaking wet, I said (aloud, I think), “I’m going to England to help my brother.”

And I did. Go to England, I mean. I don’t think I helped, really. I ended up spending a lot more time with another actor on the film than I did with my brother, who mostly wanted to brood and sleep when he wasn’t working. It felt absolutely right to be there, though. I didn’t really have the money or the time to make the trip, but I had the clarity and certainty, when I came out of that fountain, that it was more important to be with my brother than to worry about a credit card bill or lack of vacation time or anything else.

There are lots of movies I like more than “A Room With A View.” But where you are in life when you encounter a piece of art sort of guides the arrow as it leaves the bow and affects how close it hits to where you live. I don’t remember ever having such a visceral, life-changing response to a movie.

It doesn't happen to me too often, but I was delivered into that state by the end of Inarritu's Babel ... I won't blow it if you haven't seen it yet, but the story about the deaf-mute Japanese teenager just hit me harder than anything I've seen in years

Wow, I now need to see that movie.

The hardest I've sobbed, movie-wise, was a tie between "Dancer in the Dark" with sweet little, going-blind Bjork, and more recently, watching "Hotel Rwanda." I just could not stop.

It was that mixed feeling of, "this is such an incredible movie" and "I never want to see this movie again."

Did you run into a fountain after "Harold & Kumar?" I can't remember...

On a much less turbulent level, The Commitments always makes me think that creativity is a good thing, music is a great thing, and people who want to try can really accomplish something wonderful.

After crashing and well you can guess(?). We keep rolling on and smoking the gears in hopes of walking the tightrope and actually making a first appearence in the virtual world of my cohort. All of you are way ahead of me when it comes to making a stand at holding a valid opinion of Spulge sympathys. Sadly in need of a current Hollywood education I can only be accused of random indetification with the grand brush stroke and mystification wrought by the plastic arts.