It occurs to me that maybe a free (and ad-free) blog doesn't really have to let you upload all the photos you want. But I'm going to try again, because if we can't festoon our blogs with celebrities, why do we fight? Besides, fame is like oxygen for my rival blogger Bighead Needleman and she'll hyperventilate. 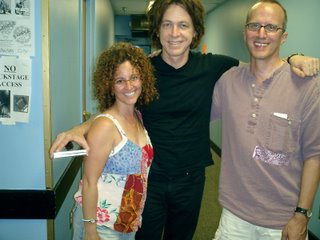 Thus: my sparkly spousette, Sting's supernatural guitar player Dominic Miller, and me, at a Sting concert, summer of '05. We got backstage because my mini-mate is so charming and friendly, by the time we got from the parking lot to the gate, she'd met a woman who went to high school with Dominic Miller, and this woman fell instantly in love with my wee wife and gave us the extra tickets she had waiting at Will Call, and then took us backstage with her, where we sat with Dominic (I call him "Dominic") and then, yes, Sting. 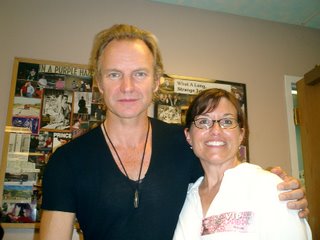 That there, that's Sting. And that's the nice woman, Roberta, by whose graces we met Sting. The thing about us is, we hang out with Sting.

Now, I've loved this guy's music for more than half my life and have always been fascinated by the person behind that amazing voice. So some of this is my own projection. But there are people whose personalities are just bigger than most. And Sting's emanates like an electrically-charged fog. It fills the room. He packs more charisma per pound than anyone I've ever met. He has that thing I recognize from being around certain actors, a kind of shy, withdrawn quality that seems to have its own gravity. Then, when he actually speaks or looks at you, it has a physical effect, the way it feels when your eyes have to adjust to bright light. When Dominic introduced us, Sting shook my hand, looked at me, and said, "Hello, Jim," and the look drilled right through my head and left two smoking holes in the wall behind me. That's a neat trick you learn when you study tantric yoga.

So, Sting is my celebrity of the day. And the concert was a reminder of how many great, memorable songs the guy has written over the past three decades. I ask you: What would life be without "Roxanne," "Message In A Bottle," "Don't Stand So Close To Me," "Every Little Thing She Does Is Magic," "Spirits In The Material World," "King of Pain," "Every Breath You Take" . . . and that doesn't even get us out of the mid-80s. I just bought the new CD, on which he plays an archlute and sings the songs of John Dowland, a composer of the Elizabethan era. Nice work if you can get it.

You almost want to resent him for being so talented AND good-looking AND wealthy AND rain-forest-preserving AND for never having sung a flat note in his life. But you can't, because he's a genius. And if I hadn't been so starstruck, I'd have thought to get my picture taken with him, too, before he walked off, slowly and majestically, taking the fog with him.
Posted by Jasph at 5:57 AM

Yeah, Sting is awesome. Just the most literate songwriter ever. Love "Wrapped Around My Finger" and "Don't Stand So Close to Me" for that very reason. How many other songwriters you know who can make a reference to Nabokov and make it rhyme with "shake and cough." Or to Scylla and Charybdis? Well ... maybe you, Jim.

One of the lyrics that always used to make me laugh when I was growing up (besides Billy Joel's "the microphone smells like a beer") was "there's a skeleton choking on a crust of bread."

I remember when you first told me about doing, sorry. MEETING Sting. We were in a Starbucks. In D.C. Ahh...those were the days. All three of them.

Man, do some people re-live the Writers On Tour experience. There could be a tour of places some people went to on the Tour.